Dungeness - mild, cloudy, drizzle, W 4 - Today the weather was much more typical for the time of year with a brisk westerly off the Atlantic, low cloud and bits and pieces of light rain. A scan of the sea from various points around the peninsula delivered a few auks, Gannets, Common Scoters, Red-throated Divers, Sandwich Terns, Kittiwakes and three flocks of Brent Geese totalling 110. A small flock of Meadow Pipits by the sewage plant contained two Reed Buntings. 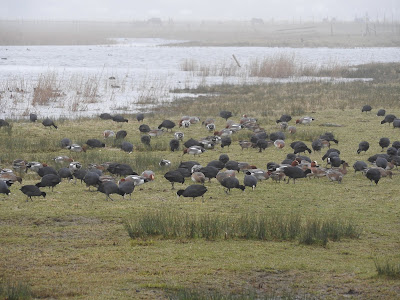 The Boulderwall fields held a close mixed flock of grazing Wigeon and Coot by Cook`s pool, plus a few Lapwing, Curlew and Ruff further away. A Marsh Harrier scattered the ducks and waders, while the four wintering Cattle Egrets flew over the distant horse paddocks towards Lydd. There was nothing of note on Burrowes apart from six Goldeneyes amongst the usual ducks, Cormorants and large gulls.
On the bay at Littlestone on a falling tide six species of waders noted including 12 Redshanks and 31 Turnstones.
Posted by Paul Trodd at 09:37