Scotney - mild and misty, sw 2 - A plume of unseasonably warm air from the mid-Atlantic sent the daytime temperature soaring into the low teens, but with it a veil of mist along the coastal plain. On the front pits at Scotney it was just about possible to view the far side this morning, where from the double bends yesterdays five Long-tailed Ducks were still present feeding amongst the Tufted Ducks and Pochards. A large mixed flock of some 1,500 Golden Plovers and Lapwings was on the front fields along with a handful of Redshank, Curlew and Ruff, plus the usual feral geese.
Visibility was similarly limited on the flooded hayfields around Dengenmarsh where the habitat looks spot on for Water Pipit, although all I could find were several Meadow Pipits and Reed Buntings. Marsh Harrier, Little and Great White Egrets also noted flying over. 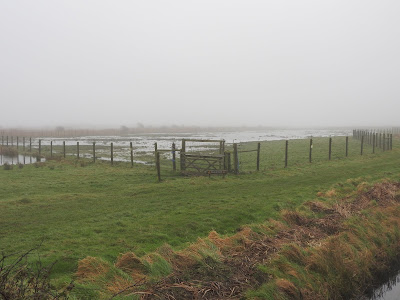 A late afternoon check of Lade south produced three Goldeneyes on the lake and a steady overhead movement of Cormorants and black crows going to roost towards the bird reserve.
Posted by Paul Trodd at 11:49