At Dungeness and the surrounding environs approximately 600 species of macro moths have been recorded down the years, which is roughly two thirds of the national total. Add to that over 100 species of Pyralidae, micro moths and it is easy to see why the shingle foreland of Dungeness is one the best places in the country for these fascinating creatures.
Migrant moths from the near continent are regularly noted, along with localised scarcities such as White Spot and Clancy’s Rustic, while Dungeness continues to play host to the only known breeding colony of Sussex Emeralds.

At Plovers we operate two moth traps, a Skinner and a Robinson, from which we have recorded over 300 species of macro moths. We also have access to a number of other moth traps locally. A typical tour of the light traps during the summer months can yield several hundred moths, comprising anything up to 100 species.

Sussex Emerald
A moth of high summer that comes to light in small numbers and is a specially protected Red Data Book species. The two projections on the hindwing separate it from all other emeralds. The larval food plant is mainly wild carrot, which grows on coastal shingle ridges across the Dungeness National Nature Reserve.

White Spot
Another Red Data Book species, and one that breeds at only half a dozen sites along the south coast of England, including Dungeness. Comes to light regularly in late spring. The larvae feed on the seeds of Nottingham Catchfly, an abundant wild flower that grows on the Dungeness Desert. 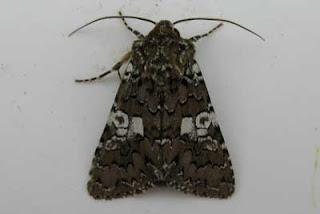 Peppered Moth
A common moth whose flight season extends from May to August. This species is often cited as an example of evolution in progress, as the frequency of the black form recently became much higher in areas of high industrial and atmospheric pollution, suggesting it was adapting to a changing environment. The larvae feed on a wide range of trees and woody shrubs. 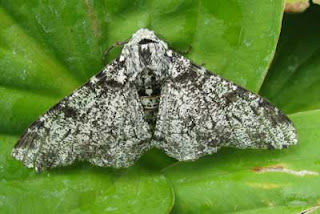 Elephant Hawk Moth
An unmistakable and spectacular moth of the summer months that comes to light in small numbers. Willowherb is the  main larval food plant. The caterpillar often attracts attention, because of its size and large black, eye markings. 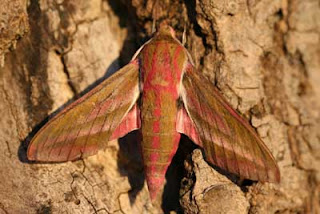 Burnished Brass
A stunning moth of early summer and unmistakable with its metallic, brassy yellow forewing pattern. It flies at dusk and feeds on a wide range of flowers including Red Valerian, Buddleia and Honeysuckle, and regularly comes to light. 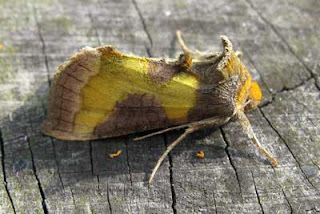 Moth`ing
Here at Plovers we can accommodate visiting Moth`ers on a B&B basis along with a full morning visiting local traps. Please contact us for further details.