Cold, dry and sunny, NE 3 - A check of the front fields at Scotney this morning revealed at least 13 Little Gulls feeding on the far side of the main lake at the Sussex end along with several Black-headed Gulls and hundreds of common dabbling and diving ducks, including 12 Shelducks, with more ducks and geese on the lesser waters. The sward was packed out with feral geese, Wigeons, Golden Plovers, Lapwings and Starlings with thousands more swirling over the farmland towards the wind farm, plus Redshank, Curlew and Green Sandpiper. A scan of the Army ranges delivered a ringtail Hen Harrier, presumably the bird that has been present across the peninsula for a week or more. Around the bird reserve the Green-winged Teal was still on Burrowes, while the usual assortment of egrets and Glossy Ibis could be seen in the paddocks and Boulderwall fields from the Lydd Road. There was a noticeable increase in Lapwing and Golden Plover numbers today, particularly around Dengemarsh and the islands on ARC, having probably moved here from the continent as colder weather is forecast next week. Everywhere I went today birds of prey were present; as a conservative estimate I must`ve seen 15 Buzzards, 10 Marsh Harriers, eight Kestrels, a Hen Harrier and a Peregrine. Buzzard numbers are now so high that they`ve moved onto the coastal wetlands where they compete with the harriers for food. It will be interesting to see how these two apex predators realign as I`ve seen many encounters between the two raptors recently, mostly with the stronger Buzzard coming out on top.

Cold, overcast, N 1 - A miserable sort of morning with a fine mizzle throughout. Having been away for a few days I started on the local patch at Lade where the usual range of ducks included 240 Pochards. Around the willow swamp and reedbeds a few Cetti`s Warblers, Chiffchaffs, Goldcrests and Long-tailed Tits vocalised, plus two Marsh Harriers quartering the airport fields. At Dungeness the sea was quiet, but the Patch delivered three Little Gulls over the boil amongst a dozen Black-headed and Common Gulls. Next stop the bird reserve and a scan for last weekends drake Green-winged Teal, which was eventually located lurking amongst some 200 Teal at the southern end of Burrowes, from where more Chiffchaffs and Cetti`s Warblers called in front of Makepeace lookout; two Goldeneyes were also noted from Dennis`s hide. On the Boulderwall fields and along the Lydd Road the now expected heron fest comprised four Cattle, two Great White and a Little Egret, two Grey Herons and a pair of Glossy Ibis. Over the road on ARC it was a case of `as you were` with the usual wildfowl, plus a Kingfisher from the Axle Lookout. 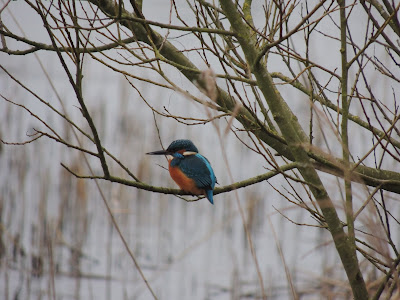 Last weekend whilst in West Sussex visiting family I sloped off for a day to explore the Arun Valley, mostly at Amberly Wild Brooks and also from the nearby Rackham viewpoint. Needless to say following the heavy rain throughout November the valley flood-plain was well and truly swollen with large parts completely flooded. Consequently, Wigeon, Gadwall, Shoveler, Teal and feral geese were numerous, along with hundreds of Lapwings and Black-tailed Godwits plus a few Redshank, Snipe and Dunlin. From Rackham I had distant views of a White-tailed Eagle harrying a Greylag; apparently there have been two birds present of late in the valley, mostly seen from Pulborough Brooks. Also noted plenty of Fieldfares and Redwings, Kestrel, Sparrowhawk and a Sika Deer.

Warm, dry and sunny, W2 - The weather continues to be unseasonably mild allowing plenty of insects still to be active, particularly in the sun traps around the Willow Trail on ARC, where a Water Rail also scurried across the boardwalk this morning. From Hanson hide a female Goldeneye showed well on the lake, while seven Black-tailed Godwits roosted on the near island amongst the usual ducks. A Kingfisher zipped by and a distant harrier into the sun was probably the ringtail harrier seen later from the hide. Six Cattle Egrets and two Glossy Ibis were on the Boulderwall fields along with hundreds of feral geese, Lapwings, Wigeons and three Great White Egrets.

The front field at Scotney was packed out with feral geese, Wigeons, Lapwings, Starlings and two Curlews. On the main lake two Little Gulls were at the Sussex end along with the expected wildfowl.

Dungeness RSPB - wet start, dry and sunny later SW 5 - A guided walk on the bird reserve for three guests this morning commenced in heavy rain; mercifully though it soon cleared enabling a thorough grilling of Burrowes where the highlight was an adult Little Gull blown in off the sea. Nine Pintails was the best of the ducks alongside c500 Teals and c200 Shovelers. As the sun broke through at least four different Marsh Harriers were soon on the wing over the Oppen Pits, with a smart juvenile flying overhead at the Scott Lookout where Chiffchaff and Cetti`s Warbler also noted. In the shelter of the bund in front of Firth further warblers and tits were present and a Kingfisher flashed by. Two Kestrels were quick off the mark after the rain with a male seen to take large worm by the pond and a female a bird from a mixed tit flock near the feeders containing mostly Long-tailed Tits. We paused at Boulderwall checking the wet fields for Lapwings, Grey Herons, Gadwalls, Little and Great White Egrets. From Hanson hide the roosting Wigeons on the near islands showed well in the bright sunshine along with two Black-tailed Godwits, from where the guests enjoyed further good views of Marsh Harrier and Great White Egret, while a Red Admiral and a Common Darter were still active in the sun-traps from the Willow Trail. 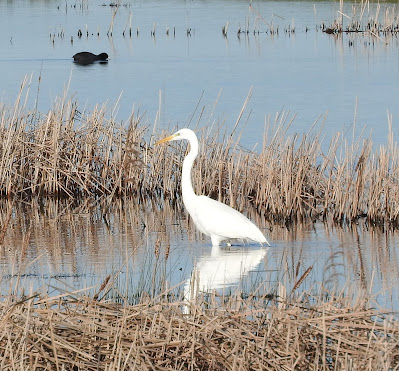 Dungeness - cold, cloudy, good viz, SSE 4-5 - 0915 - 1120hrs - Joined the locals at the fishing boats for a seawatch this morning in ideal weather conditions, and what a cracker it turned out to be. From the get-go the bread-and-butter was provided by hundreds of Gannets, Kittiwakes and auks (mostly Razorbills), either streaming west (some cutting in close to shore) or feeding in frenzied flocks upon shoals of fish further out - a wonderous spectacle indeed. Two brown Eiders (scarce here) were bobbing about a few yards off the shingle beach, while a juvenile Sabine`s Gull flew to and fro on several occasions throughout the watch 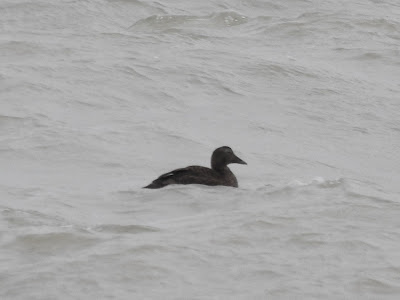 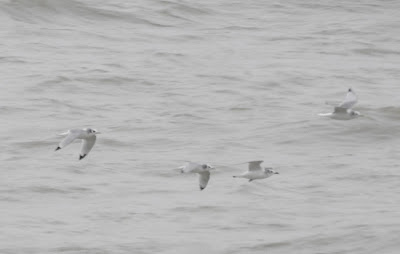 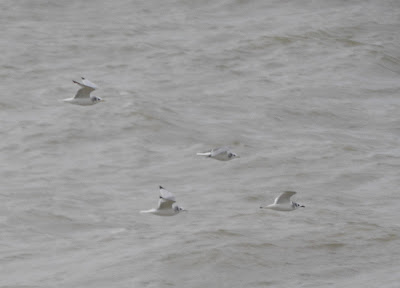 Kittiwakes on the move

Two flocks of Teal rushed through as well as several Common Scoters, a pair of Eiders, a Velvet Scoter, a Red-breasted Merganser, a Brent Goose, three Fulmars, a Dunlin and at least 50 Little Gulls in scattered parties at various distances. A score of head-nodding Red-throated Divers passed close inshore along with singles of Black-throated and Great Northern Diver, and a Bonxie and two Pomarine Skuas further out. But the jam in the sandwich belonged to the auks with a single Little Auk and no less than FOUR westbound Puffins (I`ve only ever seen three since moving here almost 17 years ago!) rounding off a seawatch of unrivalled variety. A fuller account of the whole watch will, I`m sure, be posted on Trektellen this evening. 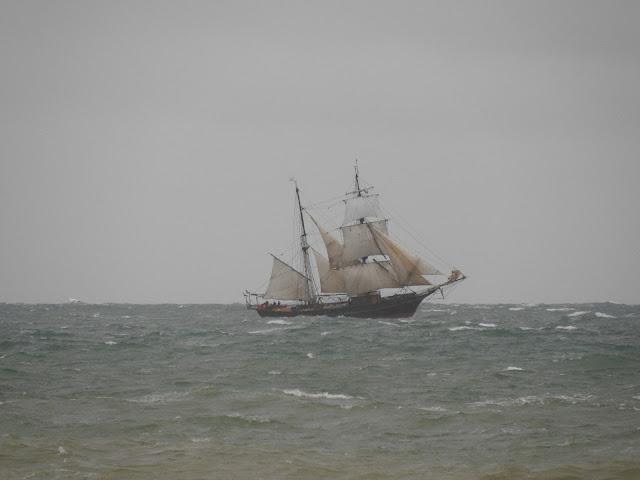 Warm, dry and sunny, NW2 - Once the early morning rain cleared it turned into a fine late autumn day with warm sunshine encouraging a Common Darter and a Red Admiral onto the wing in the shelter of Lade ponds. On south lake a count of 235 Shovelers was of note. Around the bird reserve it was a case of `as you were`, with six Cattle Egrets and a pair of Glossy Ibis on the Boulderwall fields. The first Bewick`s Swans of the season were located this morning when Martin C noted eight birds flying towards Lydd. They were soon located in the oil-seed rape field (the same one as last winter) off Dennes Lane where they hunkered down in amongst a herd of 80 Mute Swans. When I arrived on site just after midday only a juvenile occasionally popped its head up, the others being slumped low down in the crop or asleep. 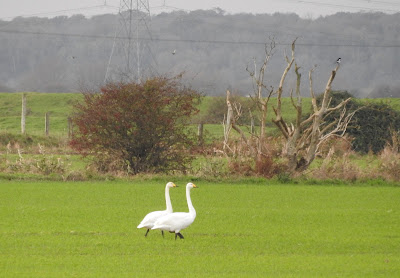 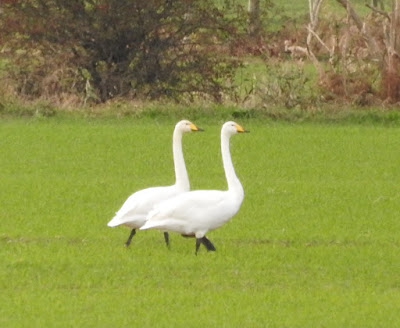 This afternoon I joined Chris P on the monthly harrier roost count at our usual spot on Walland Marsh where 14 Marsh Harriers came to roost in wet and windy conditions. Whilst there we noted two Whoopers Swans strutting around and calling in a corn field and nine Bewick`s Swans (four adults, five juvs) flighting in to roost on the nearby reservoir. Also present, a Barn Owl, five Buzzards, 12 Snipes, c300 Fieldfares, calling Water Rail and Cetti`s Warbler and Golden Plovers over in the gloom on the walk back to the car. 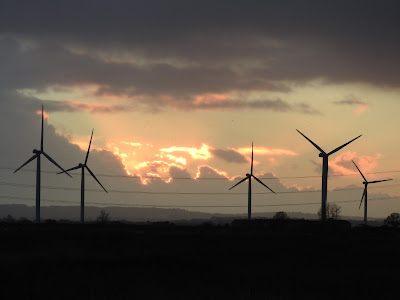 Sunset over Walland Marsh
Posted by Paul Trodd at 14:34 No comments:

Warm, dry and sunny, NW 2 - After several days of poor weather it felt great to get out and about this morning, commencing at Scotney where up 1,000 feral Greylag and Canada Geese were on the flooded roadside sward, along with a handful of Curlews, Redshanks and a Ruff, plus all the usual Lapwings, Teals, Shovelers and Wigeons. A drive out across Walland farmland searching for any early wild swans or geese drew a blank, although a stubble field along Swamp Lane attracted 80 Mute Swans along with 20 Skylarks and a few Meadow Pipits. 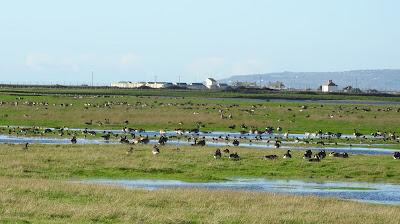 A walk down to the sea and back along Dengemarsh Gully was virtually birdless, although the field by Springfield Bridge hosted a few Pied Wagtails, Reed Buntings, Linnets, Goldfinches, Meadow Pipits and Skylarks. From the bridge there was plenty of raptor activity over the wetlands from Marsh Harriers and Kestrels, plus two Great White Egrets and six Cattle Egrets on the Boulderwall fields. From Hanson hide the usual ducks and gulls, including a distant Goldeneye, Kingfisher, Sparrowhawk and a late Clouded Yellow butterfly. From the willow trail a flock of Long-tailed Tits attracted two Chiffchaffs.