Lade - wet and windy, cool, sw 4 - A couple of very unseasonable days of weather to start the week with yesterday`s winds gusting to near gale force, followed by showery rain and much cooler today.
Hundreds more Swifts and martins passed over the lakes this morning, while there was a noticeable increase in Black-headed Gulls and even a few Common Terns. However, the highlight was two moulting adult Little Gulls on north lake, although by the afternoon they`d already moved on.
An hour at the fishing boats mid-afternoon was fairly pedestrian with just a trickle of Common Terns and Gannets through. Elsewhere, the Gull-billed Tern and Black-winged Stilt were reported from ARC. 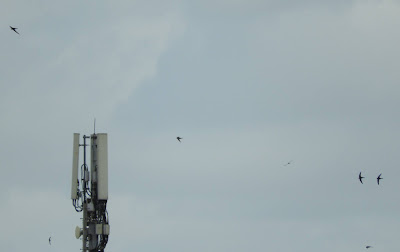 Swifts over the aerial mast
Posted by Paul Trodd at 11:02