Dungeness - 0545hrs - mild, hazy, light airs - The forecast last night predicted a light south-easterly, so expectations were high for a seawatch this morning. Hopes were soon dashed however with not enough wind to fly a kite. Lasted an hour and a half during which time we had one close dark phase Arctic Skua and a distant, spoonless, Pom powering through. Sandwich Terns reached the 1,000 mark but there were few Common Terns with nearly as many Little Terns, at around 10. Also, a few Gannets, scoters, divers, Sanderlings, Whimbrels, mergs, 3 Teal and a Shoveler. The usual stalwarts in the seawatch hide, plus Baby Dave on a long weekend from Bedfordshire.
Strolled over to the Obs where I had good views of the Peregrines on B station, but precious little else. After bemoaning how few migrants were present, discussion moved onto the subject of Brown-tailed Moths, which had made the media headlines recently due the, "plague of caterpillars crawling over the beach at Greatstone". With temperatures in the mid-20`s C the hairy little blighters were everywhere. 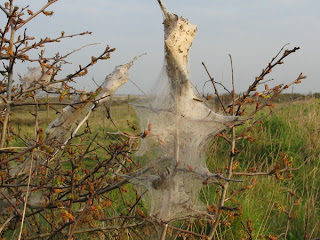 Brown-tailed Moth `tents`, Lade
The only other news around and abouts today concerned a fly-over Bee-eater on the bird reserve, a Gropper at Galloways and more Poms past the point this evening. The near resident Glaucous Gull remained at the boats.
Posted by Paul Trodd at 13:05