Lade - cool and cloudy, ne 2 - An overcast day throughout, but humid at times. Having been away over the weekend we spent most of the morning on the local patch and, being as he was 13 today, making an extra special fuss of Barney. 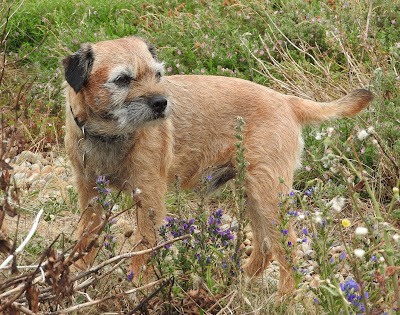 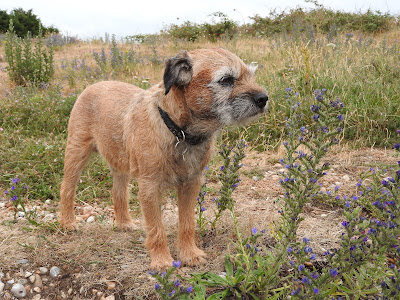 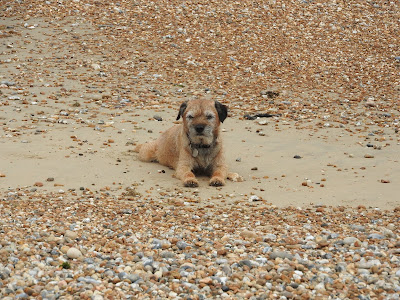 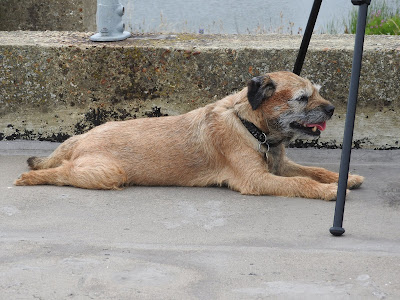 Barney at 13 on his local patch today

First thing over south lake around 300 Sand Martins feeding low over the water, twittering away, suddenly spiralled up as a single unit and headed southwards; whether or not their reaction was due to a Hobby perched on the 30` mirror, or a genuine migratory movement I shall never know. There seemed to be plenty of juvenile Reed Warblers in the reedbeds and young Whitethroats in the dry scrub, although very few Linnets of note. On the incoming tide a Whimbrel joined the regular Curlews to roost on the Desert.
This afternoon on a falling tide the Curlews were arranged `sensibly` on the bay affording a reasonably accurate count of 271 birds, plus 154 Oystercatchers, five Barwits, a superb Red Knot, 20 Sandwich Terns, 10 Mediterranean Gulls and two Yellow-legged Gulls, plus five Grey Seals offshore. The summer`s first juvenile Marsh Harrier was on the wing this aft, quartering the long reedbed and feinting at birds way too big for it such as Mute Swan and Coot. Several Yellow Wagtails drifted over calling, while I could only find two spikes of the localised plant White Mullein at the southern end of the pond.
At midday I called in briefly at ARC from Hanson hide where the wader highlights included two Ruff, three Dunlin and a Greenshank, all adults, plus the two regular Little Gulls. 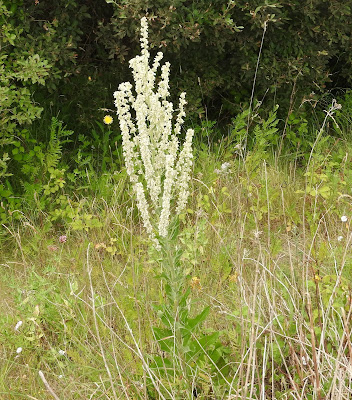