Lade - mild and wet - Following two days of near continuous rain, this morning it temporarily abated allowing some semblance of normal birding weather conditions. However, it is mild and despite the wet stuff the garden moth trap has been packed full of moths; last nights catch comprised 12 species of macros including two Delicates, L-album Wainscot and Mallow.
There was no change on the local patch with up to four Great White and 12 Little Egrets present. A few Swallows, House Martins and Chiffchaffs were the only migrants on offer today. On the bird reserve the three Cattle Egrets were still going between ARC and Boulderwall fields and the three Little Gulls were present on ARC yesterday. 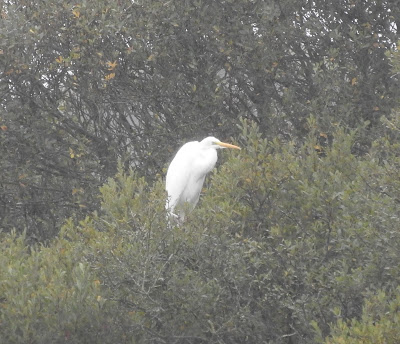 Dungeness ssw 3  - 0930-1200hrs - Joined SM, MH, JH and CT at the fishing boats for a tidy seawatch in overcast conditions with the wind veering around to just west of south. Westbound Gannets, Sandwich Terns and auks (mostly Razorbills what I could see) numbered around 100 each, plus four Brents, two Common Scoters, 10 Little Gulls, 10 Mediterranean Gulls, 10 Kittiwakes, 10 Dunlins, 15 Knots, two Little Egrets!, 10 Arctic Skuas, a Bonxie, two Manx Shearwaters, Balearic and Sooty Shearwater (1130hrs), Black-throated Diver and a Leach`s Petrel (1000hrs) that stayed in view for a full 10 minutes before it eventually rounded the point. Several pulses of Swallows went out and larger flocks of Starlings totalling 150 came in.
An afternoon tour of the bird reserve dodging the rain showers resulted in two Cattle Egrets amongst the Boulderwall herd, Red-throated Diver and Common Tern on Burrowes and a Black-tailed Godwit and Garganey on ARC where the Eastern type Common Tern was reported earlier.
Posted by Paul Trodd at 08:37