Lade - cool, cloudy, E 4 - Another nippy day with the wind coming in off the sea from the east. We flogged around the local patch for little reward other than two late Swallows over south lake - heading north! A check of the Kerton Road pit section of the Desert for yesterdays Stone Curlew drew a predictable blank.
Dungeness - Anyhow, things picked up somewhat around noon following a call from MC saying that yesterdays Shore Lark had returned to the puddles by the fishing boats. Shore Larks are magical little birds that you don't see very often, and certainly not down here on the south coast where their status is one of a rare autumn/winter visitor. Infact in my time on the Marsh I`ve only seen one before; the  Rye Harbour bird that wintered by the red-roofed hut amongst a flock of Skylarks about ten years ago. This was my first at Dungeness as the last one in the recording area was in 2005, although I seem to remember Steve Broyd having a flyover at ARC on the bird reserve some years ago.
My first one ever was on a YOC trip to Staines Reservoir sometime in the late 60`s when we bumped into a bird on that famous tatty, old causeway. I thought it so exotic and in a way still do, whether encountered on the high tops of Cairngorm, the salt marshes of north Norfolk or Lincolnshire - or even by a muddy puddle on Dungeness!
However, I digress... Ten minutes later I was on site and enjoying this cracking little ground-hugger with a yellow and black face as it was becoming surrounded by local birders in cars, also enjoying our rare visitor from across the North Sea as it fed on weed seeds. I had second dibs later in the afternoon when there were fewer birders present and concluded it to be the bird of the autumn, for me at least, in this rarity-starved year. 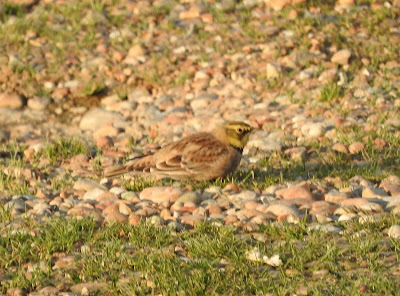 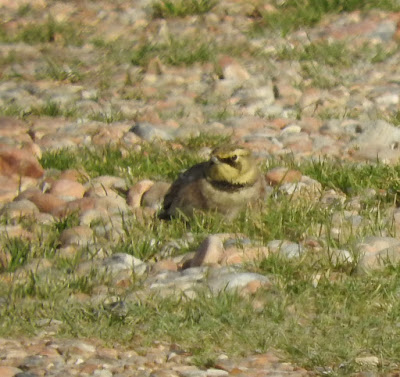 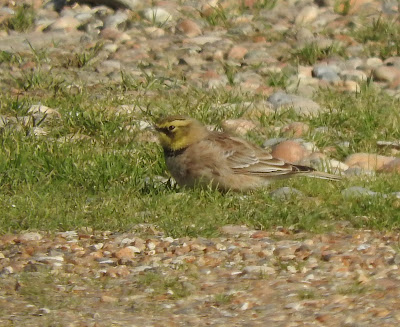 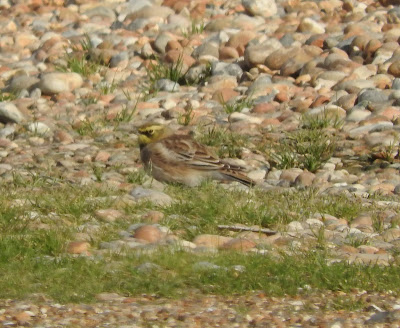 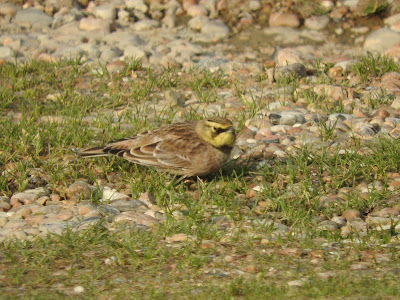