Lade - 0500hrs - warm, dry and sunny, sw 2 - Another disappointing catch in the garden trap last night, probably due to clear skies and a temperature dip, which was disappointing for the moth`ers staying from the Midlands; however, Mouse Moth and Reed Dagger were new for the year. There was plenty of activity last night around Long Pits where visiting moth`ers from the Midlands and Suffolks had up to 15 light traps in operation catching well over 100 macros including Sussex Emeralds and Scarce Chocolate-tip.
On the bird front several grounded Willow Warblers were feeding in the garden firs while two Yellow Wagtails and a Whimbrel went south over the pits.
St Mary-in-the-Marsh - Throughout early summer an odd hirundine has been present with the breeding Swallows near the New Sewer, St Mary`s-in-the-Marsh. I`ve seen it twice while CP has been watching it regularly and suspects that it may be breeding nearby. It appears to show plumage traits of both Swallow (face pattern, but with red throat and forehead replaced by white, a plain rump and a Swallow type call) and House Martin (size and tail). It is an interesting beast and probably a Swallow/House Martin hybrid, but if anyone has any thoughts we`d be pleased to hear... 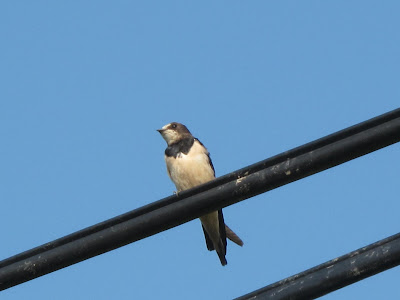 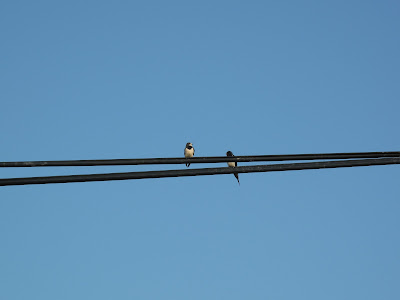 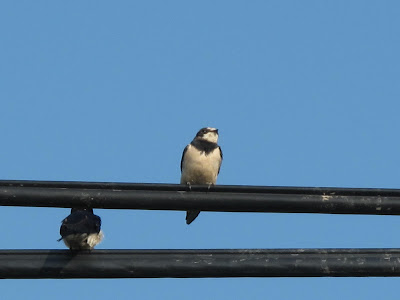 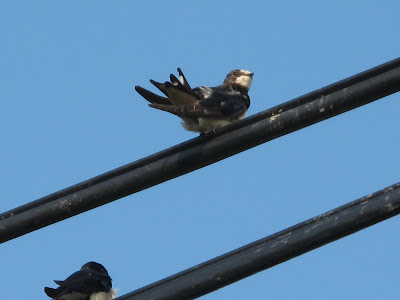 Elsewhere around the Marsh this morning, an Osprey flew east over Scotney (CP) a Balearic Shearwater was seen off Dungeness, while on the bird reserve Avocet and Blackwit on ARC, plus an evening Spoonbill on Burrowes (SB).
Posted by Paul Trodd at 09:53