Lade - 0530hrs - humid, thundery, light southerly - Whilst checking the moth trap first thing it was great to hear the half-hearted song of a passage Willow Warbler in the garden fir trees. A scan with the bins revealed a couple more next door; migration is underway for some.
On the moth front plenty of Silver Ys in the trap, while Straw Underwing was new for the year, amongst the 35 species present. Several migrant Painted Lady and Red Admiral butterflies were already on the wing and feeding on the buddleia by mid-morning. 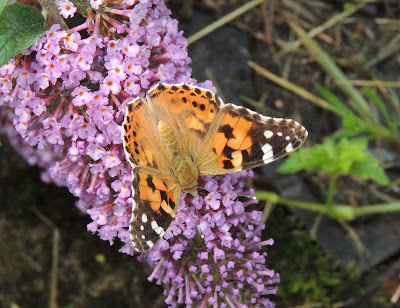 As it was high tide there was a steady trickle of Curlews overhead to roost on the storm beaches which eventually totalled 75 birds. The island at the south end of the pit had attracted several Common and Sandwich Terns amongst the Black-headed Gulls. With thunder rumbling overhead and during a brief shower a Spotted Redshank called twice just long enough to locate as it headed south.
At Dengemarsh around the same time a flock of up to 100 waders were forced to fly low by the rainstorm, which included at least 25 Greenshanks, along with a separate flock of 23 Green Sandpipers (MH, BP), while on ARC 10 Curlew Sandpipers and 22 Redshanks briefly paused on the shingle ridges.
Dungeness - 1430hrs - A 90 minute seawatch from the boats in the company of MH was quiet apart from 100 Common Terns, 10 Sandwich Terns and two Black Terns. Two Brown Seals and a Harbour Porpoise were also fishing offshore and a couple of small groups of Sand Martins passed down the coastline.
Posted by Paul Trodd at 11:50