Dunlins on the beach

Saturday - A day trip to Boulogne with the family yesterday while not a birding trip did deliver a few bits and pieces on the drive down the coast road from Calais. Several Buzzards, a covey of six Grey Partridges, hundreds of Lapwings and a field full of mostly Mediterranean Gulls were noted along the way. Around Boulogne harbour there were plenty more gulls including Yellow-legged and at least one Caspian Gull, several Little Egrets and a Black Redstart. At the Calais Channel tunnel terminal on the way home hundreds of Jackdaws roosted on the overhead gantries 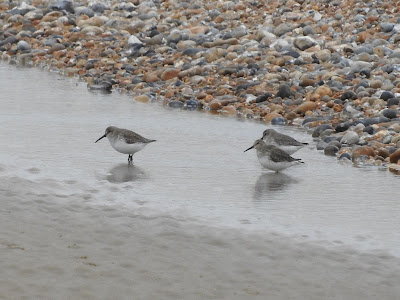 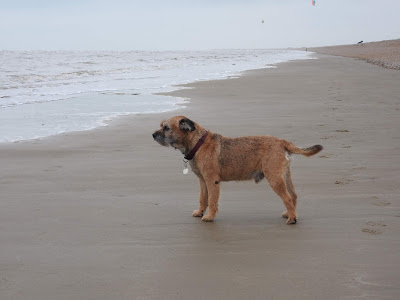 Dunlins and Barney on the beach

Lade - grey and overcast, E2 - Another grim day with low light and the threat of rain. A circuit of the local patch coincided with an incoming tide where 200 Dunlin were counted on the bay sands along with 200 Curlews, 100 Sanderling and 350 Oystercatchers, plus lesser numbers of Grey and Ringed Plovers and five Shelducks.
On the lakes two drake Goldeneyes were amongst five redheads, otherwise there was no change in the wildfowl from last week.
Posted by Paul Trodd at 09:14