Lade/Dungeness - warm, dry and sunny - Superb day to be out and about in the field with light winds and no rain. At 0700hrs whilst still dark a steady stream of Redwings could be heard passing over the cottage and heading inland. We started off on the local patch where a Dartford Warbler showed briefly along the main track. Great White Egret, Marsh Harrier, Kingfisher, Cetti`s Warbler and Chiffchaff also noted around the willow swamp while Goldeneye were up to six in number across both lakes along with four Shelducks.
More Goldeneyes, Marsh Harriers and Great White Egrets were seen around the bird reserve, plus a single Cattle Egret on the Boulderwall fields amongst the stock. The walk down to the pines and out the back of Tower pits delivered more Redwings along with several Song Thrushes and Blackbirds, Great Spotted Woodpecker, Sparrowhawk, Long-tailed Tit, Goldcrest and Chiffchaff.
Elsewhere this week a few White-fronted and Pink-footed Geese have attached themselves to a grey goose flock along with a single Tundra Bean Goose. The flock has been on the fields between Cockles Bridge and Lydd but the farmer tends to moves them on, where bye they decamp to Scotney along with hundreds of feral geese. A handful of Bewick`s Swans are also in the general area, often associating with Mute Swans on the rape-seed fields. Caspian and Yellow-legged Gulls have been located at the point, and roosting on Burrowes, while the sea has the usual wintering birds including the occasional passing Velvet Scoter, Eider and Merganser. Egret numbers have thinned out with just a single Cattle and several Great Whites present.
The settled weather saw plenty of birders out around the peninsula today enjoying the sunshine, although the forecast is for more rain over the weekend. 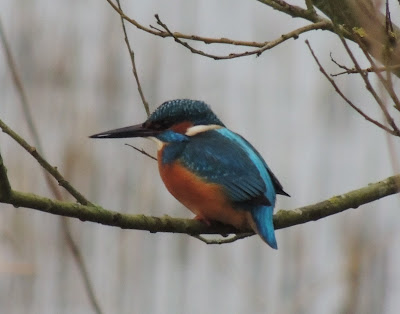