Lade - mild, sunny, sw 3 - Storm Bella tore through the peninsula overnight delivering almost an inch of rain in its wake with damaging gusts lifting roof tiles, flattening fences and even some walls hereabouts. However, by noon it was all over bar the shouting as the wind dropped and the sun broke through making a circuit of the local patch most pleasant. Goldeneye numbers had increased to five on south lake, while raptors abroad in search of food included three Marsh Harriers, two Sparrowhawks and a Buzzard. Along the strandline this afternoon thousands of cockles had been washed up on the high tide following the gale. 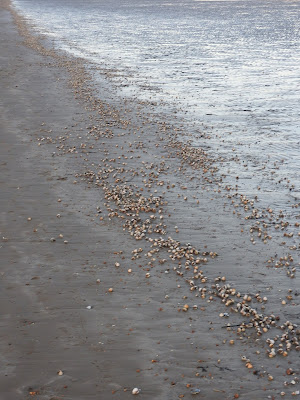 Cockles on the beach

With up to three Iceland Gulls present locally I`ve spent a fair bit of time lately checking the gull flocks loafing on the sands at low tide, but without success. However, yesterday afternoon after a trip down to the Patch and a fair bit of searching I eventually located a first winter bird amongst a large gull flock on the beach. Offshore, from the seawatching hide, a steady movement of Gannets, Cormorants, auks, Kitts and Red-throated Divers rounded the point. 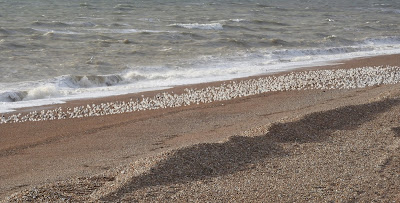 Spot the Iceland Gull!
Posted by Paul Trodd at 08:15