Rye Harbour NR - warm, dry and cloudy, light airs - Had to go to Rye this morning, so called in at the beach reserve early on where a superb suite of waders was on offer. Passage waders included 10 Common and two Wood Sandpipers, five Whimbrels, three Red Knots, 60 Dunlins and a flyover Spotted Redshank, plus the expected Curlews, Oystercatchers, Redshanks and Ringed Plovers. A Peregrine flying over Flat Beach caused mayhem amongst the breeding Common Terns with over 150 in the air screaming their heads off. A few Little and Sandwich Terns also noted, plus five Little Egrets, Grey Heron, Teal, Shelduck, a Wheatear and several flocks of Linnets and Goldfinches. 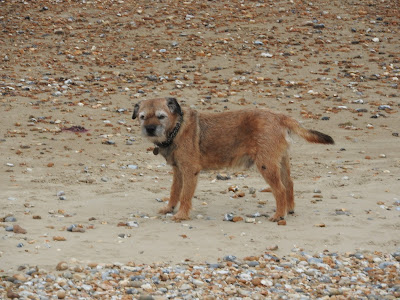 Barney on the beach

Following a report of a Caspian Tern seen briefly over Dengemarsh this afternoon I checked the bay and lakes just in case, but there was no sign. Wader numbers on the sands were similar to yesterday, although Sandwich Terns were up around 150 in number. The only other oddity today was a Jay flying in off the sea about noon time.