Tuesday - dry, bright and sunny, light airs - Perfect weather conditions then for a guided walk around the RSPB circuit for eight guests. We started at the car park feeders where three Greenfinches, a Reed Bunting and a Great Spotted Woodpecker were amongst the common tits and the like. The two wintering Glossy Ibises briefly showed in front of Firth Lookout with eight Goldeneyes and two Pintails on Burrowes along with the usual suite of wildfowl, gulls and Cormorants. Highlights on the circular route included five Marsh Harriers, two Great White Egrets and cracking views of a Raven being mobbed by a Carrion Crow. Over the road on ARC the two Slavonian Grebes found earlier by OL were still present on the far side of the lake as was the redhead Smew. 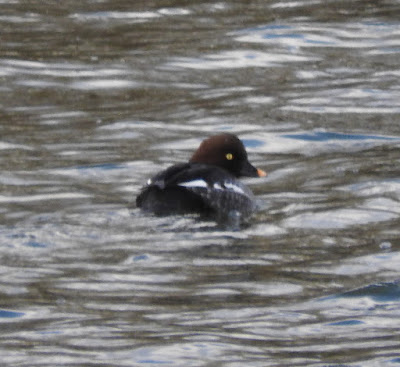 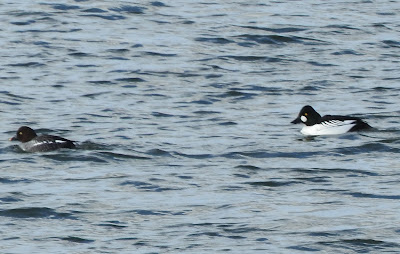 Wednesday - cool, cloudy, W 3 - Not so warm weather wise today. I started on the beach at Littlestone checking through the waders on a rising tide, but couldn`t help but notice the thousands of Cormorants and hundreds of Gannets well offshore, around to Dungeness, indulging in a feeding frenzy, presumably having found a large shoal of sprats. At Lade pits six Goldeneyes showed well close to shore on south lake where also Marsh Harrier, Little Egret, Green Woodpecker, Cetti`s Warbler, Water Rail and Chiffchaff noted. As we didn`t have a Smew anywhere locally last year I thought I`d best make the most of the ARC redhead that`s been around since NYD. It was tucked up asleep amongst a host of dozing, diving ducks and best viewed from the causeway road (park by Long Pits and walk back), although I could find no sign of yesterdays Slav Grebes. Another angle on the lake from Screen hide did however deliver both Kingfisher and Bearded Tit, new for the year, not that I`m particularly keeping such a list of course... Moving onto Scotney front fields where a couple of thousand Lapwings, Golden Plovers, Wigeons and Starlings kept me busy for an hour or so and where 56 Shelducks, Marsh Harrier, Great White Egret and a Ringed Plover also noted. Finished off the day checking the fields around Lydd airport: a few Mipits, Skylarks, Kestrels and a Common Buzzard.