Here and There - A mixed weekend of weather and visits to a variety of locales kept the interest levels up. On Friday a tour of the still waters across Lade and Dungeness delivered the predictable large numbers of diving ducks, plus eight Goldeneyes on Lade south, a redhead Smew on ARC and 61 Shelducks at Scotney. Three of the wintering Cattle Egrets were busily feeding in the sheep fold at Cockles Bridge, while the two Glossy Ibises were at the back of Cook`s Pool. Several each of Marsh Harrier, Common Buzzard and Great White Egret were a given at Dengemarsh. 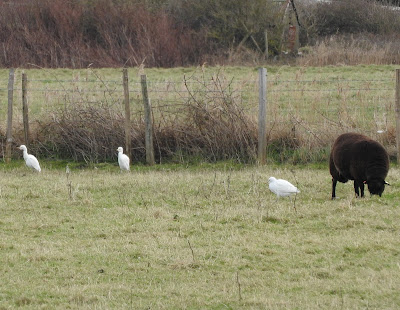 On a frosty Saturday morning, just after dawn, a circular walk around the farmland north of New Romney drew a surprise with the distinctive hooting of a Tawny Owl emanating from a stand of trees in a large garden. The owl eventually flew across an avenue of poplars and into an ivy-clad ash where it presumably went to roost (Tawny Owl is something of scarcity down here on the flatlands); four Common Buzzards, ten Yellowhammers and a Little Egret were also noted along Hope Lane. In the afternoon a family visit to the harbour arm at Folkestone on a rising tide yielded a number of Turnstones, Redshanks, Med Gulls and a Grey Wagtail, but no sign of the recent Snow Bunting by the swingbridge.