Dungeness - humid, hazy sunshine, light airs - I was en-route to the point to meet guests for a mornings guiding when Dave B flagged me down to tell of a male Serin he`d seen in his garden that had just flown off towards the new lighthouse. A few minutes later I picked the bird up on call flying around the Britannia pub before it eventually disappeared over towards the Sanctuary. It was then on with a tour of the peninsula for Colin and Jo as we located the expected Black Redstart, Wheatear (including juvs), Meadow Pipit, Skylark, Whitethroat, Stonechat, Pied Wagtail and Kestrel. Moving onto the bird reserve and from Hanson hide plenty of wildfowl and waders to sift through including 26 Black-tailed Godwits, six Avocets, a Glossy Ibis and two Black-necked Grebes, plus good views of a female Marsh Harrier and two distant Buzzards. From the Access Road, another Glossy Ibis, two Cattle Egrets, a Buzzard and a Hobby. On Burrowes a few pairs of Common Terns still on an island in front of Dennis`s, a pair of Oystercatchers with a chick, seven Ringed Plovers, a fly over Great White Egret and all the usual gulls and ducks. A decent enough morning for the guests with 64 species of birds noted plus plenty of dragonflies and butterflies. 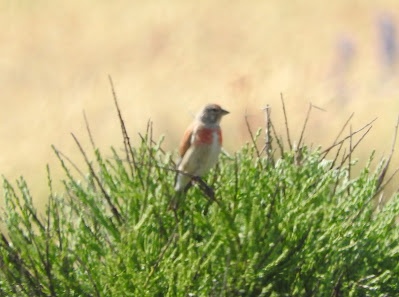 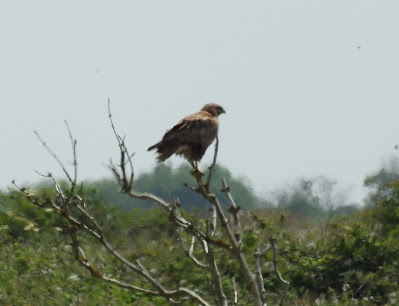 Linnet and Buzzard, Dungeness
Posted by Paul Trodd at 10:48