Lade - warm, dry, cloudy, s 3 - We always try and have at least one day a week without using a vehicle and its normally a Sunday, such as today. Pat joined us for a circuit of the local patch in unseasonably mild weather where there was plenty to see and not just from the large numbers of waterfowl on north and south lakes. Kingfisher, Sparrowhawk, Goldcrest and Chiffchaff were all noted around the willow swamp and as we cut down Seaview Road to the beach a late Swallow flew south along the line of the railway track, my latest here by two days.
The burgeoning flowering plant list for November now includes Sticky Groundsel, White and Ribbed Melliot, Evening Primrose and Herb-Robert, and I`m sure with due diligence plenty more could be discovered.
Despite the beach being busy with walkers and land yachts there was plenty of birds on the sand with seven species of waders and over a thousand gulls, including 200 Great Black-backs, plus singles of Caspian Gull (1st winter) and Mediterranean Gull (2nd winter).
Back home working in the garden, Brambling, Redpoll and Goldfinches were noted overhead throughout the day with Goldcrests in the fir trees and a Red Admiral butterfly on the Senetti, which is still in full flower. 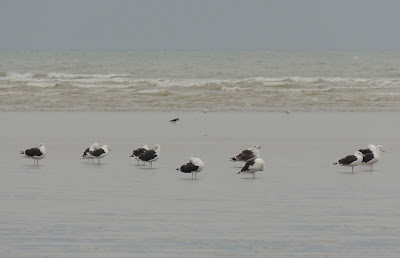 A party of Great Black-backed Gulls 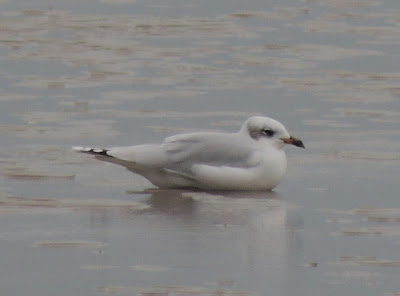 Mockmill - We tramped out across the shingle in near perfect conditions for a roost watch at the top end of Mockmill. Along the way a Bittern flew from a patch of reeds by south lake towards the main reedbed and was our first of the winter at Lade. As the light dimmed hundreds of corvids and pigeons streamed overhead, while a swirling mass of Starlings put on a wonderful display before pitching down in scrub and reed behind the wall `mirror`. Although no owls were noted at least 8 Marsh Harriers headed to roost into a brief, but spectacular sunset. 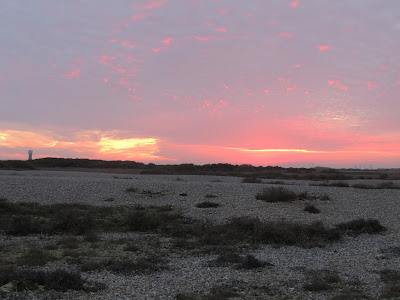 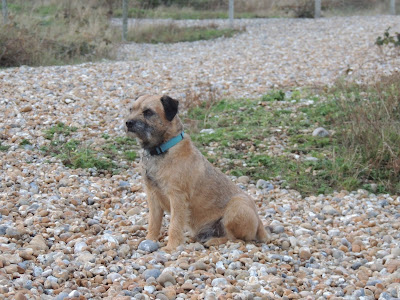