Dungeness - mild, cloudy, drizzle, S3 - A wander along the foreshore this morning from the lifeboat station to the lighthouse delivered very little of note apart from a Black Redstart by the sea containers, several inbound Skylarks and Goldfinches, a Merlin and a handful of Goldcrests and a Firecrest in scrub by the Sanctuary, while the lone Shore Lark remained faithful to the puddles by the fishing boats. Half an hour with the seawatchers produced plenty of Gannets, auks (mostly Razorbills), several Sandwich Terns, Wigeon, Common Scoter, Mediterranean Gull and a Red-breasted Merganser. 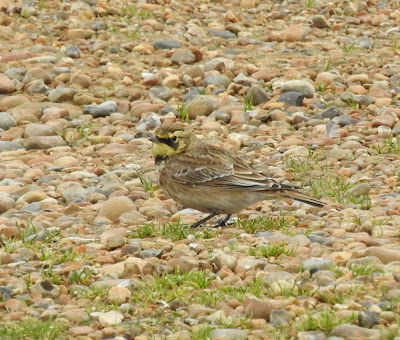 Shore Lark on its third day

Around the bird reserve this afternoon a few more Goldeneyes had moved in with three on ARC, two on Burrowes and one on Lade. Great White and Cattle Egrets were noted at Dengemarsh and the Red-throated Diver remained on Burrowes. Whilst in the visitors centre MH and DC were watching a raptor over the far side of the lake which we eventually identified as a Rough-legged Buzzard amongst several Marsh Harriers and Common Buzzards, before it eventually went down by the Oppen pits. I moved to the Long Pits to try and relocated it looking back but had no luck.
Posted by Paul Trodd at 10:05