Dungeness - 0645hrs - cool, cloudy, sw3 - A 30 minute seawatch produced just 2 divers, 4 scoters  and a trickle of Gannets east, plus 50 Common Terns at the Patch. On the land the usual Black Redstarts, Wheatears and Stonechats around the Old Light, Peregrine over the power station, 4 Swallows inland, Whitethroat and a ringed Firecrest in the moat.
Lade - Several Blackcaps singing in the willows was noteworthy.
RSPB - 1400hrs - Plenty of warblers around the reserve, particularly Blackcaps, Sedges and Whitethroats. At Dengemarsh a few Swallows over and a pair of Garganeys. Earlier this morning Nightingale, Garden Warbler and Cuckoo reported elsewhere.
Kerton Road Cafe - The highlight at the cafe was a pristine Puss Moth and the first Muslin of the year. 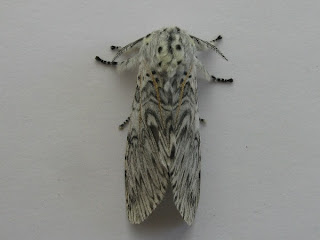