In Praise of Herring Gulls

Lade - 0800hrs - fine, dry and sunny, sw2 - Having neglected the local patch somewhat this week I decided to have a good look around on this sunny spring morning with the gorse in full flower and the scent of almonds wafting in the breeze. Summer visitors included singing Whitethroat, 5 Reed, 3 Willow and 1 Sedge Warblers, a Chiffchaff, 10 Linnets, 2 Swallows and a Mipit. Resident species holding territory included 2 Cetti`s, 2 pr Shelducks, 4 pr Gadwalls, 2 pr Great Crested Grebes, `trilling` Dabchicks and displaying Kestrel. At least 50 Curlews to high tide roost on the storm beaches and a couple of hunting Marsh Harriers over the airfield. 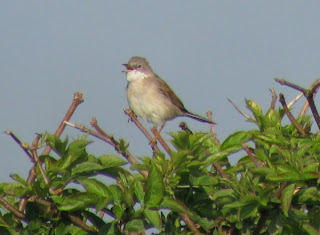 Herring Gulls (or "Seagulls", there, I`ve said it...) are probably the most loathed creatures down here on the coast due their anti-social behaviours, and would definitely receive plenty of avian ASBOs if there was such a thing. But come on lets hear for the good old HG, a truly British Bulldog of a bird. This is no trash species - a-la Canada Goose, Pheasant or Greylag - we`re talking about, but a bird of "conservation concern" whose numbers are plummeting around these islands, so lets have a bit of respect. Anyhow, it was good to see this declining, yet enterprising bird taking full advantage of the acres of solar panels fitted to roof spaces hereabouts; it would seem that the nest fits nice and snug between the panel and tiles. Lets hope this augments the breeding success of this magnificent bird along with the colonies on Burrowes and Scotney, to yield another bumper crop of speckled juvs this summer.  After all, where would all the gull aficionados be without the Herring/Yellow-legged/Caspian/ Gull tribe to pore over? Much the poorer I`d say...
Posted by Paul Trodd at 09:56