Lade - heavy rain all morning, ne4, sunny and se2 later - A stinker of a morning was in complete contrast to this afternoons warm sunshine and blue skies. An hour over the pits delivered good views of 2 Cuckoos, Whitethroats and Sedge Warblers plus several Marsh Harriers hunting over the airfield.
Dungeness - 1400hrs - no surprise that one or two migrants came out to play after the rain, including a cracking male Pied Flycatcher in the lighthouse garden; also a Wryneck and Redstart earlier. Whilst watching the flicker news came through of 4 Poms seen from the seawatching hide, so I joined MH for an hour at the end of the concrete road and sure enough we eventually logged 2 Spooners up-Channel along with a single Arctic and another a bit later on. Also, 2 divers, 1 Fulmar, several parties of Gannets, two groups of 20 odd Whimbrels and Barwits and a Manx down-Channel. Could be a good day for Poms tomorrow... 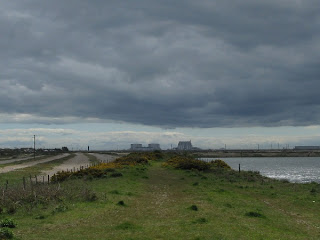