Lade  - 0600hrs - Warm, dry and sunny, hot later, s2 - Another cracking, hot summers day with a slight southerly breeze just taking the edge off the heat. 24 species in the moth trap last night including another Maiden`s Blush, 10 migrant Silver Ys and 20 Flounced Rustics.
From the off a noticeable passage of flava wagtails throughout the morning passing over the cottage and along the foreshore, where several small flocks were grounded. Plenty of butterfly activity with Holly Blues, Red Admirals, Peacocks and Small Tortoiseshells around the garden.
Due to the hot weather we decided it was high time that Barney had his bi-annual haircut and bath, being as he`d developed a `lions mane` and had started to ming a bit of late. Mrs PT was on the razor and scissors while I pinned him down. After about 90 minutes we`d filled a bucket with hair and the old boy was behaving as good as gold (I`d bribed him with the promise of a rice bone), until that is Mrs PT ran the bath... Now, anyone who knows Barney will agree as terriers go he`s pretty well behaved, but this mutt does not like water; he gives me that, "do I look like a Labrador" attitude. Anyhow, I eventually rugby tackled him by the shed, wrapped in a blanket and dumped him in the soap sudsy bath where Mrs PT did the business. The next problem was getting him out, but after much slipping and sliding with towels at the ready we got him back out into the dust bowl of a garden where he proceeded to run around in circles and roll in the dust until dry. What a performance! 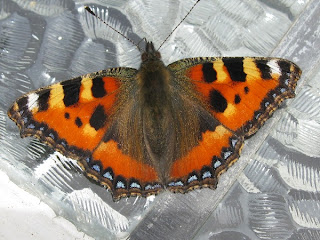 ARC - 1200hrs - A slight change in the waders from Hanson with 2 juv Knots in front of the hide along with 6 Ringed Plovers, 5 Common Sands, 2 Little Stints and a single Dunlin. Little Egret, Marsh Harrier and Peregrine also noted, plus a large movement of Sand Martins over and a couple of Swifts around the water tower. At least 10 more flava wagtails here too.
Posted by Paul Trodd at 12:36