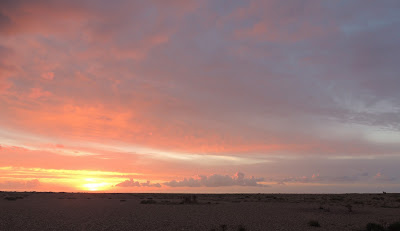 Dungeness - 0615-0815hrs - mild, cloudy, light airs - With the promise of a south-easterly we rose early to be greeted by a spectacular sunrise over the bay, but light airs - yet again the Met Office had got it wrong. However, an hour in the seawatch hide with TG and SO delivered the expected early morning movement of Sandwich Terns, gulls and distant Gannets, plus 4 Arctic Skuas, a Bonxie and 2 westbound Balearic Shearwaters that fluttered by reasonably close over a mirror-like sea.
A Grey Wagtail and a few Mipits were on the power station sewage pans with a Black Redstart and Pied Wagtails along the fence. Small flocks of Swallows and martins gathered on wires and above the old light in preparation for a Channel crossing, while the bushes around the point held 20 Chiffchaffs, 2 Willow Warblers, Blackcap and a number of Robins. 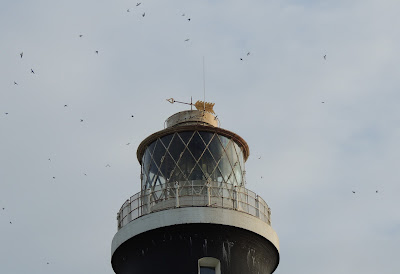 Hirundines over the old light, Dungeness

Lade - After breakfast it was time for the monthly WeBS count on the lakes where Coot and Gadwall top scored at 560 and 352 respectively, plus 28 Moorhens and 23 Dabchicks also attracted to the huge rafts of floating water weed, some thick enough to support a Grey Heron.
Migrant wise streams of hirundines pushed south, no doubt hoping to cross the Channel before the rain set in. Warblers were thinly distributed with just Chiffchaff and Blackcap noted, while a few Mipits and Yellow Wagtails passed overhead. In the calm before the rain 5 Kestrels, 2 Marsh Harriers, Buzzard and Sparrowhawk all noted. By the time we arrived home, just before noon, the rain band hit making it time for second breakfast. 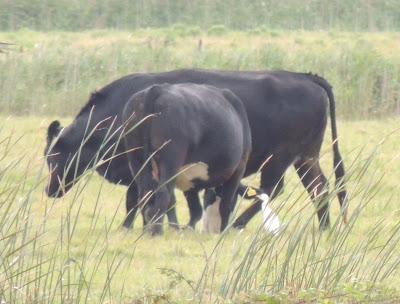 ARC - By mid-afternoon the rain cleared and we went for a wander down to Screen hide and the pines where a large flock of passerines comprised mainly Chiffchaffs, Great, Blue and Long-tailed Tits, several Blackcaps and a Lesser Whitethroat. Robins were everywhere, plus 10 Blackbirds, 5 Tree Sparrows, 3 Song Thrushes and 2 Reed Buntings. From Screen 3 Marsh Harriers drifted over disturbing the Golden Plover/Lapwing flock and 5 Ruff. On the water, Black-necked Grebe and Red-crested Pochard.
Nipped over the road before going home where the Cattle Egret was present in the Boulderwall fields following the suckling herd around.
Posted by Paul Trodd at 11:30