Lade - mild, windy, overcast with occasional sunny spells, W 4 - Well, well, well, what a memorable day on the local patch. As we trudged over the shingle ridges into a brisk, yet warm, westerly I wasn't expecting much change from the past few days. However, as the sun broke through up popped a Dartford Warbler in gorse scrub along the main track beside south lake, but I could find nothing new on the water apart from a couple of Shelducks and Greylags. At the ponds and along the causeway a tit flock attracted a stunning Firecrest, several Goldcrests and a Chiffchaff, where Water Rail, Cetti`s Warbler, Green Woodpecker and Marsh Harrier also noted.
North lake is normally quiet but this morning hosted a Red-necked Grebe amongst a Pochard flock, a site first for me, which is somewhat surprising considering there have been one or two on local waters and on the sea during my time here. Judging from its nervousness around the ducks and grebes I reckoned it had just arrived and at least once fluttered across the lake towards the swing bridge end. After tweeting the news out the first local birder to arrive was Dave Scott who`d just seen a couple of redhead sawbills fly over the coast road heading towards south lake. After a bit of searching we soon relocated two Goosanders on the far side of the lake. A decent session then, that was about to get even better... 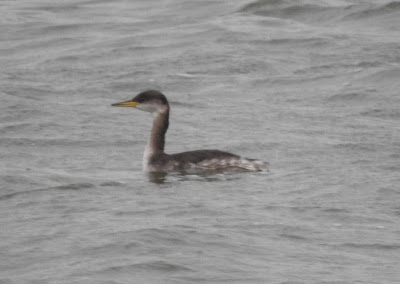 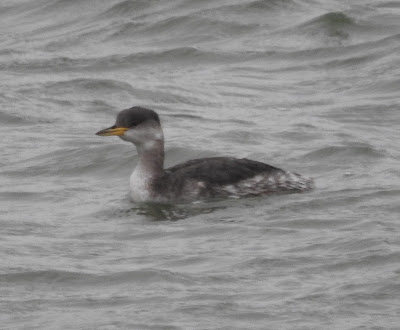 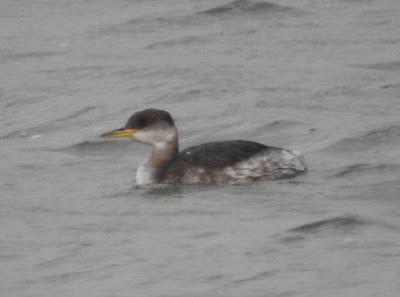 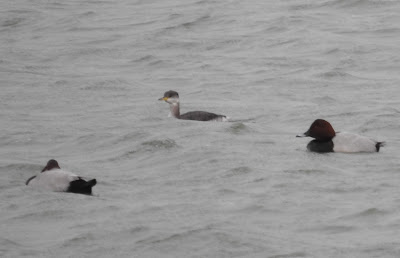 We had just arrived home for a cuppa and a Boneo when Dave called telling that a group of visiting birders had just found a yellow-browed type warbler by the ponds that sounded like a Pied Wagtail when it called! It could only be one bird - a Hume`s Leaf Warbler! And indeed it was. We were soon back on site and joined a group of locals to search for the bird which was relocated low down in cover in the ponds. It briefly attached itself to a tit flock when its diagnostic double note "chew-weet" call was heard several times; it showed particularly well in a sea buckthorn bush exhibiting the cold plumage tones of a Hume`s, always subjective in such light, but thankfully with that distinctive call, which to my ears sounded similar to a Spotted Redshank.
I`m unsure who found the bird, but well done whoever you are, a superb find and needless to say a new site record. Apparently it disappeared down towards north lake beside the scrub-clad bank next to the caravan park and wasn't seen after mid-afternoon. I shall check first thing tomorrow morning though.
Posted by Paul Trodd at 11:23