Lade - warm, dry and cloudy, light airs - It was one of those mornings on the local patch that wherever you looked there were birds, lots of `em, everywhere. Thousands of hirundines, mostly Sand Martins and Swallows, swarmed over the reedbeds, dipping down to drink in the lake and settling on the power lines over the Desert. Every so often they would funnel skywards and disappear south only to be replaced by more coming in from the north. Meadow Pipits and Linnets were numerous over the shingle ridges feeding on emerging micro-moths and bugloss seeds respectively, while Stonechats and Dunnocks flicked atop the broom.
Scanning from the aerial mound the sky inland was full of birds: feral geese and ducks coming and going, Lapwings, Golden Plovers, gulls, Woodpigeons, Stock Doves, corvids and more hirundines, plus several Buzzards, Marsh Harriers and Kestrels. Around the willow swamp 12 Little Egrets, 20 Chiffchaffs, several Lesser Whitethroats, Robins and Blackbirds. The lakes were crammed again with ducks, grebes, geese, swans, Coots and gulls. 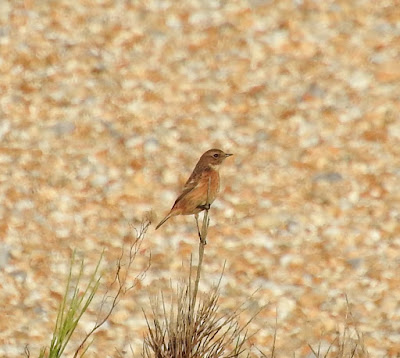 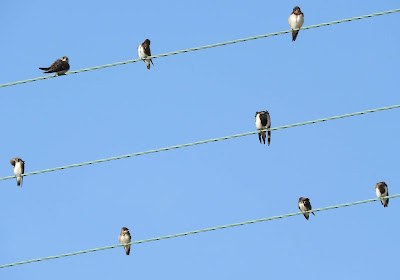 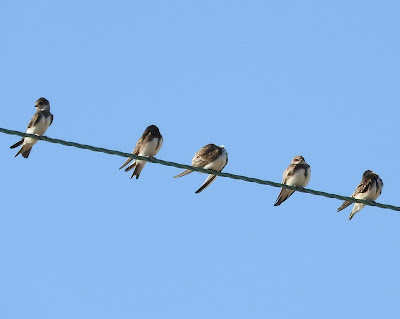 A check of the bay from Littlestone on an incoming tide around noon produced superb views of hundreds of waders as the sea pushed them close to shore. I only counted the birds on the gloopy mud in front of the wooden shelter: Knot 185, Dunlin 145, Bar-tailed Godwit 23, Curlew 28, Oystercatcher 23, Ringed Plover 12, Redshank and Turnstone. Many more were feeding towards Greatstone and beyond. 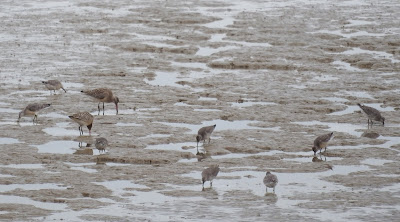 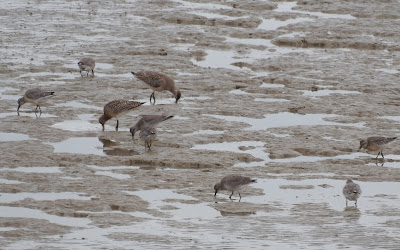 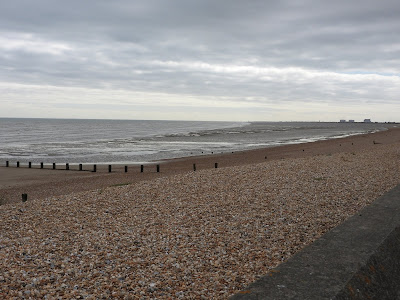 Lade Bay looking south towards Dungeness from Littlestone
Posted by Paul Trodd at 05:21