Lade - warm, dry, sunny, ne 2 - A cool start to the day that soon warmed up by mid-morning. On south lake a Greenshank and Ringed Plover paused awhile on the island with Redshank and Common Sandpiper around the margins. Chiffchaff were well represented across the site with at least 20 birds, plus Reed Warbler and Lesser Whitethroat by the ponds. On the lake a flight of 20 Wigeon were new in amongst the usual wildfowl and grebes.
In the Plovers garden the first Goldcrest of autumn called from the fir trees. 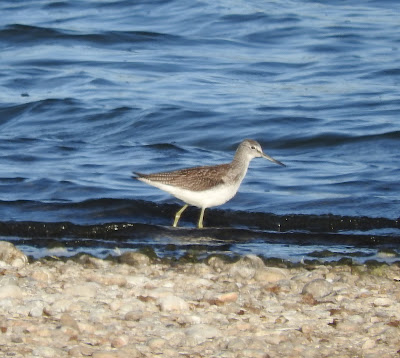 Dungeness - A guided walk for RSPB members concentrated on waders. From the hides around Burrowes, 50 Lapwings, two Common Sandpipers, two Knots and a Golden Plover noted, plus the usual wildfowl, Marsh Harrier, hirundines, egrets and two distant Ravens over the switch station. More Chiffchaffs were noted in the bushes and three Wheatears performed well on the Desert from the access road.
The ARC has been the pick of the sites around the bird reserve for some time now, and today was no different. I only had brief views of the Pectoral Sandpiper in the afternoon from Hanson hide where the guests were treated to good views of 120 Golden Plovers, 100 Lapwings, four Ruffs, two Greenshanks, four Black-tailed Godwits, five Dunlins and a Snipe, but once again no Little Stints in what has been a poor autumn for them across the region. Also noted around the reserve, Little Grebe, Water Rail, Cetti`s Warbler, five Buzzards, Cattle, Little and Great White Egret, Garganey, Pintail and Sandwich Tern.
We finished the day down at the fishing boats where plenty of Sandwich and Common Terns, Kittiwakes, Mediterranean Gulls and a couple of Arctic Skuas were plundering the sprats. Large shoals of Whitebait attracted Mackerel close to shore and at the time there were so many the sea appeared to be `boiling` as they leapt clear of the water. Jacques was reeling in plenty of the latter (thanks Jacques they were very tasty!) plus a small Bass which was returned to the sea. 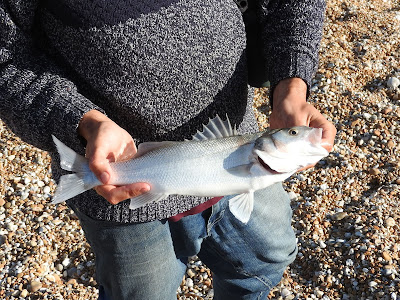