Lade - cold, sunny, W3 - The first frost of the season was on the car windscreen this morning following yesterdays nippy north-westerly airflow calming down overnight; still, after a week of making up flat-pack furniture, decorating and fitting curtains it felt great to be back out in the field whatever the weather! However, there wasn`t much to report on the local patch with the only migrants being a handful each of Skylarks, Meadow Pipits and Goldfinches overhead, plus a few Blackbirds, Robins and Chiffchaffs around the ponds. The main event on the water was a group of 12 Mediterranean Gulls on north lake. 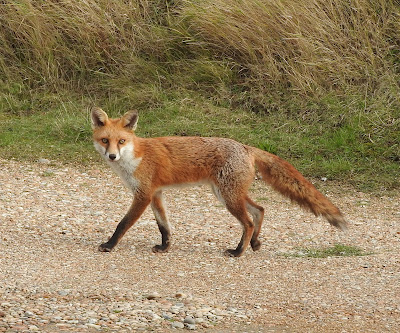 It wasn`t much more inspiring at Dungeness either where I joined MC at the Patch scanning a mixed flock that included at least 20 Mediterranean Gulls and a 1st winter Arctic Tern. Further out the usual Gannets and auks fizzed by, a dark phase Arctic Skua came in close to shore and three Gadwall went down-Channel. The land was devoid of interest. Moving onto the bird reserve where a flock of several hundred Golden Plovers and Lapwings on Burrowes attracted two Turnstones, 10 Dunlins and a Grey Plover. On the lake a redhead Goldeneye was my first of the autumn, while four Cattle Egrets tracked the stock on the fields at Boulderwall.