New Romney - mild, cloudy, W 2 - We`ve been settled in town a fortnight now; I say `town` but New Romney has more the feel of a large village, and the great thing is that a five minute walk in any direction brings you into the wide open spaces of Romney Marsh. I`ve pretty much explored most of the local public rights of way now and have decided to keep a bird list within an old fashioned statute mile radius of the house. However, it must be said I`ve never been much good at listing, but new beginnings and all that has found me checking through finch flocks for that `first` Greenfinch and sparrow flocks for a Tree Sparrow, with no sign of either so far... The past couple of mornings I`ve favoured the Hope Lane circular walk to the north of town adding a Reed Bunting to the list and where there was a noticeable influx of Blackbirds and Redwings feeding on hawthorn berries today. Our small garden has also come up trumps with Chiffchaff and Rook over the weekend, plus a cracking female Sparrowhawk this afternoon. 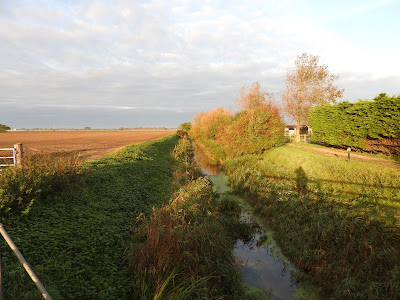 Further afield a check of Lade yesterday on the incoming tide produced eight of the usual ten species of waders, but very little on the pits and almost no passage migrants apart from a Chiffchaff by the ponds and a handful of Skylarks overhead. This morning, in a moment of madness, I walked Dengemarsh gully where I was hoping for at least my first crest of the season, but where the sum total of passerines was two each of Robin and Stonechat plus a Wren! It really is that bad and the poorest autumn I can recall for many a year. The weather systems haven`t exactly been favourable though and we can only hope for an easterly airflow sometime soon. On the bird reserve the usual glut of egrets and ibises are still present along with a large mixed flock of plovers on Burrowes, plus a Ring Ouzel from the access road (CT).