Back in the field!

Warm, dry and sunny, NW 3 - Phew, what a week it has been; moving house - never again! Anyhow, it was great to be out and about around the peninsula this morning birding and bumping into local birders again. My first port of call just had to be Lade, even though I felt like an interloper having driven there! And it did not disappoint with a Black-necked Grebe by the causeway on north lake, a flyover Bittern on south lake, plus two inbound Bramblings and three Jays. Also noted: several Chiffchaffs by the ponds, a trickle of migrating Skylarks, Meadow Pipits and Goldfinches from the lookout and two Marsh Harriers and a Sparrowhawk around the willow swamp. 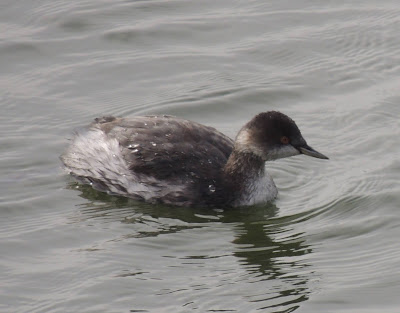 At Dungeness the sea was busy with hundreds of close auks (including a few Razorbills) and a feeding frenzy of Gannets and gulls further out, including a few Kittiwakes, Sandwich Terns, Med Gulls and a passing Bonxie. The land was quiet though with just three Jays, 10 Meadow Pipits, two Black Redstarts, a Grey Wagtail and several Chiffchaffs; can it really be mid-October, and where are all the crests? Moving onto the bird reserve where four Cattle Egrets on Boulderwall fields were joined by two Glossy Ibises having flown over from ARC. On Burrowes a Black-tailed Godwit and two Dunlins were amongst the usual Lapwings and Golden Plovers, while from Makepeace 31 Snipe and another Black-necked Grebe noted.