Calm before the storm

Lade - mild, dry, sunny, light airs - A superb morning with a spectacular sunrise over the bay and little wind, perfect conditions for birding. On the local pits several Great Crested Grebes had moved in to establish breeding territories and begin pair bonding with much head shaking and bill rubbing, while five Goldeneyes were on the lakes and several Chiffchaffs around the ponds.
We then walked Mockmill flushing two Snipe and six Meadow Pipits before flogging out back of the `mirrors` and north lake where a singing Skylark was a first for the year. Also noted a few more Mipits, Linnets, two Stonechats, four Corn Buntings, Kestrel and Buzzard, but little else.
Given the weather the bird reserve was predictably busy with birdwatchers enjoying some field time before Storm Dennis rushes in at the weekend. The elusive drake Smew was playing hide and seek on Tanner`s Pool beside the usual crowd of feral geese, Wigeons, Curlews, Golden Plovers and Lapwings on Boulderwall fields. Elsewhere around the reserve it was the same winter fare.
There were no reports of any wild swans on Walland Marsh today, although the five Long-tailed Ducks were noted on the western pit outback of Scotney (PB). 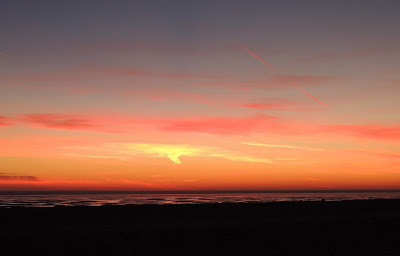 Sunrise over Lade bay
Posted by Paul Trodd at 08:22