Dungeness - warm, dry and sunny, light airs - Once the early morning frost had melted it turned into a fine spring-like day with warm sunshine bringing forth legions of flying insects in the still air. Spent some time scanning the wet fields and pools at Boulderwall, that paid dividends with scope views of a highly mobile Water Pipit on the edge of Tanner`s pool alongside three Meadow Pipits. Several Cetti`s Warbler were in song and a party of Bearded Tits called from the reedbed in Cook`s Pool.  At least four Great White and two Little Egrets were on the wetlands, plus 500 Golden Plovers, 500 Lapwings, 35 Curlews, 200 Wigeons, 200 Starlings, 20 Stock Doves, two Snipe, two Black-tailed Godwits and various Coot, Teal, Wigeon, Gadwall and Tufted Duck. Raptors included three Marsh Harriers, two Buzzards and a Kestrel, while the drake Smew had relocated to Burrowes.
On Walland Marsh 41 Bewick`s and two Whooper Swans at Midley and all five Long-tailed Ducks were confirmed on the back lakes at Scotney (OL).  A check of the bay from Littlestone revealed 12 Redshanks and 14 Ringed Plovers amongst hundreds of Dunlin, Sanderling, Curlew, Knot and Oystercatcher.  There was no change to the wildfowl on Lade pits from yesterday. 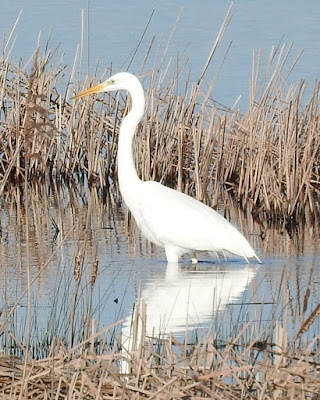 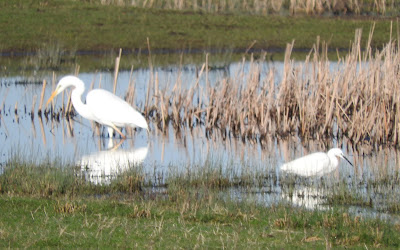 Egrets on Boulderwall fields
Posted by Paul Trodd at 08:55