Dungeness - cool, cloudy, sw5 - Another breezy day made for difficult viewing. A quick look on the bird reserve (Rugby Boys on site) revealed a pair of Garganeys and a Hobby at ARC, 3 Knot, 2 Turnstone and a Dunlin on Burrowes and a Blackwit on Dengemarsh. Plenty of low Swifts everywhere, and reports of a ringtail Hen Harrier early on this morning.
Cranes - A pair of Common Cranes spent at least 3 weeks on the Marsh earlier this month but have not been reported for a week or more now. They were seen at a number of locations, but particularly favoured  potato fields that were being irrigated. 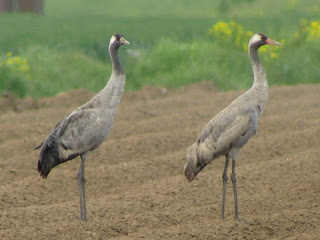