Lade - warm, dry and sunny, sw3 - Plodded round the local patch this morning recording breeding birds for RSPB survey. Of note was a pair each of Ringed Plover and Lapwing out on the Desert. A Buzzard put in an appearance and the Cuckoos were busy around the main reed bed checking out poor, unfortunate Reed Warblers. Three singing Cetti`s Warblers over the back and more Dabchicks with juvs out on the water.
To say its dry down here is an understatement. I cant remember the last time we had rain, it must have been weeks ago. Anyhow, the Desert is living up to its name with the vegetation burnt to a crisp, particularly the gorse thickets which are tinder dry. The only splash of colour is from the yellow of the deep-rooted Prostrate Broom. Even the Foxgloves are struggling and as for Vipers Bugloss, there`s hardly any on show this spring. 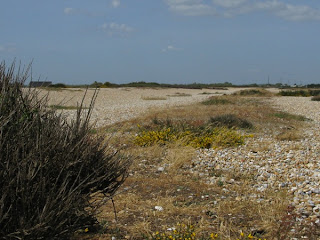 The Desert
Greatstone Beach - 2000hrs A late look at the beach revealed a flock of 47 small, dark, Ringed Plovers, which I assumed were of the tundrae race as they were noticeable different from the resident birds.
Posted by Paul Trodd at 09:41