Dungeness - 0615hrs - mild, sunny, ne3 - A late start this morning. All the usual suspects present, plus visiting birders arriving all the time, no doubt expecting a repeat performance of yesterday. Did an hour and a bit and had a steady flow of waders, mainly Barwits but also Sanderling, Grey Plover, Dunlin, Knot and Whimbrel, while a scoter flock contained 11 Velvets. A few Common and Little Terns through and 2 Black Terns on the Patch. Nothing much on the land apart from singing Whitethroats Wheatear, Black Redstart, Mipit and Linnets.
Checked out the boats where Shortie the Glaucous Gull was still present. Had a quick look at the sea and a party of 5 Poms passed close to shore! (could be another good day) Also, 5 Little Terns and 2 Red-throated Divers. Grey Seal and several porpoises just off shore. 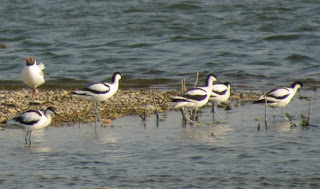 Avocets, ARC
ARC - 0830hrs - From the causeway a decent selection of summer plum waders coming and going including a dozen Barwits, 5 Grey Plovers, 2 Dunlin, Greenshank and a party of Avocets that landed for all of 3 minutes! Also, LRP, Lapwing, Redshank and Oyc. 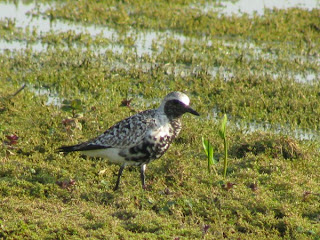 Grey Plover, almost in summer plum, ARC
Dungeness Boats - 1500-1630hrs - An afternoon seawatch from the boats delivered a steady flow of mainly Barwits, totally c500, most of them close to shore. A few Grey Plovers, 2 Pom Skuas (1615hrs), 10 Little Terns, 2 Brents, 30 Common Terns, 50 Common Scoters and 20 Gannets. At least 3 porpoises just offshore and Shortie loafing on the beach after stuffing himself with fish offal..
Posted by Paul Trodd at 02:06