ARC - 0915hrs - Warm, dry and sunny, w2 -Whilst poking about on Walland Marsh this morning, news broke of a Golden Oriole on the bird reserve. It was found by the Lord of Hookers (aka Fairweather Birder) who went off piste birding by the Screen Hide. As I walked down the track I could hear it calling from a clump of willows opposite the hide. I settled down to wait with the finder and the Joker, who regailed us with stories of GO`s past, in the moat, before the 2nd Cod War. The old boy was in full flow when the said black and yellow job showed for a split second before plunging into the next thicket; what a view! of only my second Dunge record. More locals started to appear as the news spread, including the Baitdigger who had one fly over his garden a few years ago. True to form the Romney Twitcher arrived on cue complete with trendy shades...
On the pit 2 Little Gulls and a Little Egret of note. 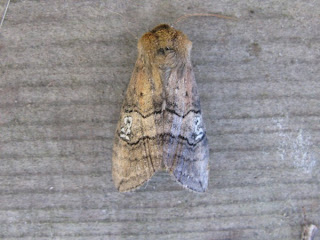 In the trap last night a Figure of Eighty, a moth I rarely get.
Posted by Paul Trodd at 10:21