Lade - 0730hrs - cool, sunny, w2 - I just know its going to be a good bird day when I`m greeted by calls of  Goldcrests and Chiffchaffs first thing in the back garden fir trees, and so it proved to be... Walking down Taylor Road and more garden crests and wagtails overhead plus a Sparrowhawk. Onto the storm beaches and 5 Wheatears 2 Whitethroats and a Stonechat, a trickle of Yellow Wagtails and hirundines, followed by 10 Mipits and a `teezing` Tripit. The scrub beside the track alongside south lake held 20 Blue and Great Tits, 2 Reed Buntings and several more Chiffs, Whitethroats, and Wheatears. On the lake loads of gulls and common wildfowl, including 10 Dabchicks, Wigeons and Shovelers, plus all 3 hirundines and a Common Sand. The sallows yielded both woodpeckers, Little Egret, Cetti`s Warbler and more Chiffs. A quick viz mig from the aireal mound revealed a trickle of more Yellow Wagtails, pipits, hirundines, Chaffinches, 6 Grey Wagtails, 2 Siskins, 2 Buzzards, 3 Sparrowhawks and one unidentified buzzard (check out the DBO website for their viz mig efforts, which included loads more raptors, and 2 each of Crane and Spoonbill!). Finished off with a brisk stroll back along the beach checking the waders, that resulted in 67 species in 90 minutes.
ARC - 1200hrs - The now expected variety of waders including 8 Dunlins, 3 Blackwits, 2 Barwits, 2 Ruffs and a Little Stint. On the lake, 5 Black and 2 Arctic Terns, plus Goosander, 10 Wigeon, Sedge and Cetti`s (very showy) Warblers, more Chiffs and a Sparrowhawk.
Fishing Boats - 1400hrs - It was all about one bird really - the sub-adult (2nd year?) Long-tailed Skua performed to order on the foreshore. It flew around a bit and also landed on the sea to pick over a dead Whiting. Worryingly, it flew into a fishing line on its return to the beach, slumping down on its belly, presumably because it only had one good leg, the other being a stump. Superb views of a bird that seems completely unafraid of humans. A steady stream of visiting birders throughout the day to admire and photograph its every move.
The Glaucous Gull, Cattle and Great White Egrets were all noted across the Peninsula, plus a good range of "warblers, waders and waptors" (to quote from the late great Norfolk birdman R A Richardson). 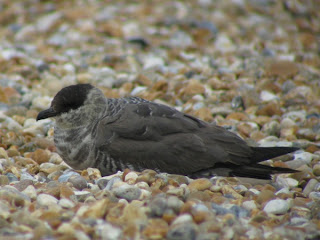 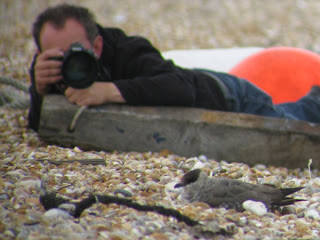 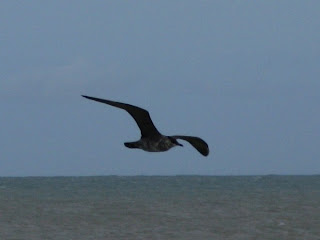 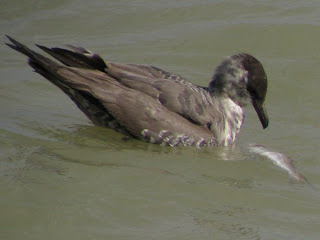