Dungeness - 0915hrs - mild, drizzle to start, sunny later, sw4
A seawatch first off, in the drizzle, with hardly anything on the move was a miserable experience; highlights were a few skuas, several porpoises, a grey seal and a cracking gag from the Joker!
Moving on to the Patch and 2 each of Arctic and Black Terns and a distant Balearic Shearwater was about it. Nothing much on the land due to the weather apart from 3 Wheatears and 50 Linnets.
RSPB - 1200hrs - For the first time in ages there was not a single wader from Hanson (more of which anon...). Over the road Raven near the beehives and we had to work hard to find a Little Stint on Burrowes, where also 50 Wigeon, 2 Pintail and a Ringed Plover. On New Ex a Greenshank and Common Sandpiper increased the wader tally and a Hobby zipped over. A few Chiffs in the scrub near Christmas Dell, plus a brief view of a flycatcher and Dabchick on the pit. At Dengemarsh the Great White Egret was viewable from the hide for a change; also several Marsh Harriers and loads of common wildfowl. A call came through and it was then back to the previously birdless Hanson hide for the 29th species of wader on ARC this autumn: a Buff-breasted Sandpiper with a drooping wing had just arrived alongside a Ruff. Cracking views of this long expected American wader as it busily fed amongst the weedy shingle ridges.
Finished up with a drive out to Midley where Tree Sparrow, Yellow Wagtail, Mipit and Kestrel noted. 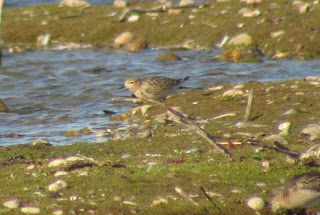 Buff-breasted Sandpiper, ARC - a duff record shot (not another one!) 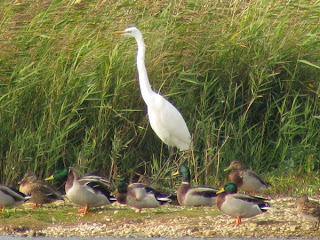 Great White Egret, Dengemarsh - (well, it is big and white and obvious and easy to digi-scope!)
Posted by Paul Trodd at 12:39