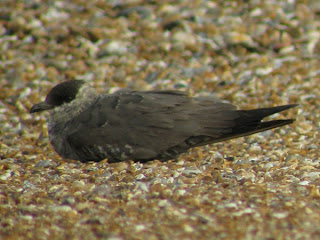 Dungeness - 0815hrs - mild, sunny, sw4 - Was on my way out to check Lade Pits when the phone rang prompting a rapid change of plan. Earlier on the Mathematician had clocked a Long-tailed Skua in front of the seawatch hide, which by the time I arrived had settled down on the shingle foreshore looking pretty clapped out. Together with the Obs staff and the Joker we soaked up cracking views of what was considered to be a sub-adult bird. Although there was nothing around for comparison it did look small and Kittiwake size. A very cold grey-brown bird with a distinctive cap and collar, barred vent and under-tail coverts and a slim all dark bill.
I`ve never before seen one in such plumage; but of course immature/sub-adult skuas are notoriously variable.
Later on during the morning it showed quite well, harrying terns and feeding on disgorged fish, and by the afternoon had moved to the fishing boats where it continued to perform well. It was reported at 4pm, but I checked at 4.30pm and could find no sign of it. For `proper` pics of said bird keep an eye on the DBO website and Plodding Birders Blog.
Elsewhere around the Point this morning 10 Grey Wagtails over, 5 Wheatears, 1 Stonechat and steady trickle of Sand Martins and Swallows. The Glaucous Gull was by the boats and the Great White Egret on Dengemarsh.
ARC 1200hrs - Pretty much a repeat of yesterday from Hanson with the usual Goldies being joined by 5 Barwits, 6 Knots and singles of Common and Curlew Sandpipers, Ruff and Snipe. On the lake, 5 Black and 2 Arctic Terns.
Posted by Paul Trodd at 12:21