Long Pits - 0730hrs - warm, dry, sunny, sw 2 increasing to 4 through the morning - A circuit of the pits was completely devoid of any waterfowl of any kind. There were no ducks, geese, swans, grebes, Coots or Moorhens on the water, nothing, how odd? Thankfully, it was a little more promising in the surrounding willow scrub, particularly along the spine at the northern end where a large flock of 50 plus passerines comprised mainly Long-tailed, Blue and Great Tits, Willow Warblers and Common Whitethroats. Also in the mix were several Chaffinches and Reed Buntings, a Spotted Flycatcher and our first two Lesser Whitethroats of the return passage. Reed, Sedge and Cetti`s Warblers, Common Tern, Kestrel, Raven and Sparrowhawk also noted.
On the western side of the pits, near the laboratory, there is a patch of purple heather in flower, reminding me that today is the Inglorious Twelfth. How the seed got to Dungeness is a mystery, but the romantic in me likes to think it was transported here from the British uplands, by a migrant Ring Ouzel. Well, I can dream... 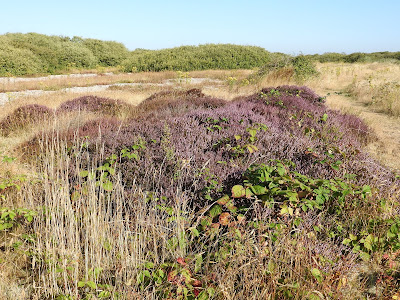 Lade - Another grim nights catch in the garden mv was considerably enlivened by a spanking Gold Spot, one of my favourite moths. 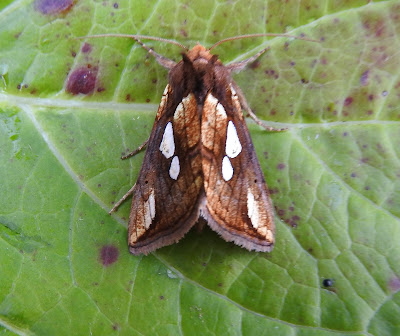 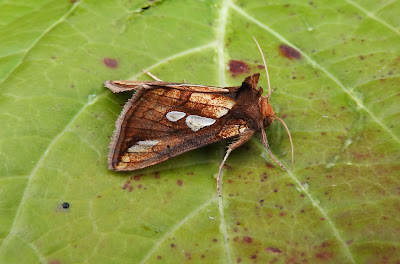 ARC - Plenty of feral geese, common ducks and Lapwings on the islands from Hanson hide, plus singles of Pintail and Wigeon, a Green Sandpiper, Dunlin and a Great White Egret that flew in high from the east and landed on the edge of the reedbed by Screen hide. 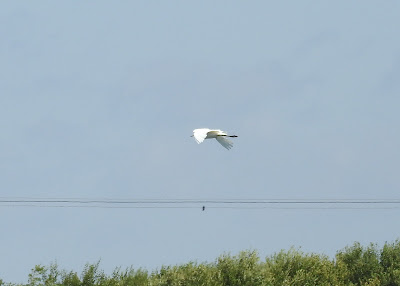 Great White Egret dropping in from the east

Burrowes - Pretty quiet here with two each of Common Sandpiper, Dunlin, Redshank and Little Ringed Plover the highlights. Two Garganey had been seen earlier, along with two Great White Egrets, while during the evening a Little Stint and Spotted Redshank were reported.
Posted by Paul Trodd at 11:45