Lade - mild, dry, light airs - A quiet weekend on the birding front with pretty much the same birds on station as last week, including the two Long-tailed Ducks which were particularly showy yesterday. However, in the stillness this evening my first Bittern of spring could be heard `booming` from across the Desert, somewhere over by the bird reserve, probably in Tower Pits.
A notable feature of this early part of spring has been the arrival of large numbers of Sandwich Terns on the bay. At low tide they sit on the sands, moving onto the shingle beach at high tide. This weekend there`s been a flock of around 70, but numbers topped out at twice that in the week. If the islands on Kerton Road pit were clear of scrub I feel sure there`d be a good chance of them nesting, as it is so close to the sea and almost mirrors their breeding site at Rye Harbour. 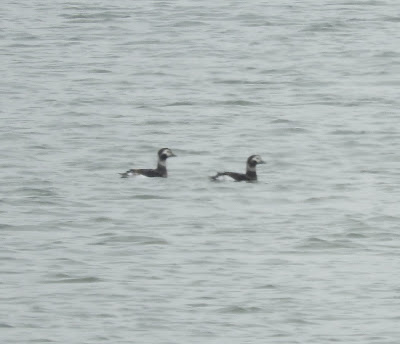 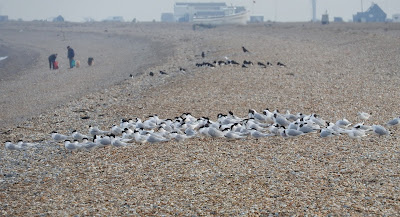 Sandwich Terns on the beach from Lade boardwalk

Dungeness - Yesterday we had a scoot around the point and the bird reserve where it was pretty much the same fare as Friday. The White Wagtails were still on Boulderwall fields and there was a steady flow of twitchers paying homage to the Bluethroat in the gully. Other reported migrants included a Red Kite over Lydd and the first Sand Martins of spring on Burrowes.