Lade - 0630hrs - cold, sunny, nw 2 - At last the wind relented and the sun broke through making for a terrific early morning session on the local patch. Walking down Taylor Road we followed a pair of Black Redstarts until the cattery where they spent some time snapping up insects in the bungalow garden and posing for the camera. Three others were noted around the site in back gardens and in the caravan park.
Scanning south lake from the interpretive signs the distinctive flight call of Little Ringed Plover was heard as one swooped down over the lake, briefly touching down on the shingle and then flying off towards the bird reserve. It was the first of spring.
Out on the water six Goldeneyes, a Black-necked Grebe and two Long-tailed Ducks were the highlights; surely the Long-tails can`t stay for much longer... Two more Goldeneyes were on north lake along with 50 Pochard and 30 Shovelers. 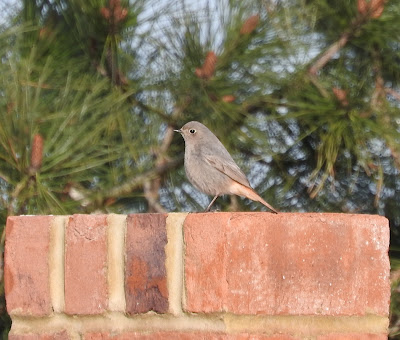 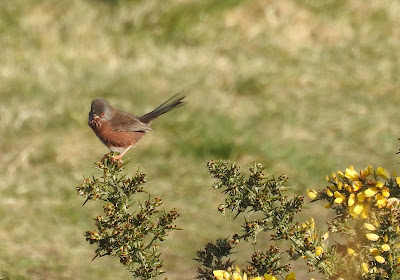 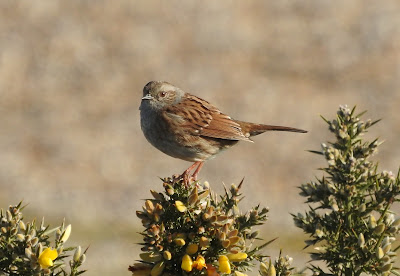 Dartford Warbler and Dunnock from the footpath

However, in the calm conditions passerines were in the ascendancy singing from every available perch: Great and Blue Tits, Robin, Wren, Blackbird, Dunnock, Chaffinch, Cetti`s and Dartford Warblers, Reed Bunting and Greenfinch. Elsewhere across the site, Green Woodpecker, Marsh Harrier, Kestrel, Buzzard , Curlew, Redshank and Mediterranean Gull all noted.
Posted by Paul Trodd at 11:47