Saturday 12th February - Mild, overcast, drizzle, SSW2
Dungeness - 0900hrs An overcast yet mild morning with light drizzle. An hours seawatch from the hide produced a steady westward flow of auks, Red-throated Divers, Gannets, Kittiwakes and assorted gulls. Some of the auks were close enough to id as Razorbills. One party of 120 Brents clipped the point heading east.
Good to see a few passerines around the Old Light with singing Linnet and Dunnock, plus Pied Wagtail, Greenfinch and Mipit. On the drive out noted the wintering Glaucous Gull on the shingle by the concrete road. 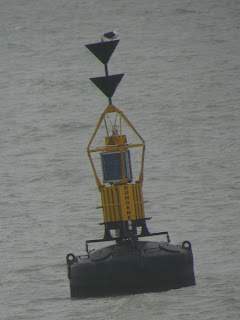 Burrowes - 1015hrs No sign of yesterdays reported Scaup. At least 150 Shoveler amongst the common wildfowl. Reed Bunting and Tree Sparrow on the feeders, and a Peregrine on the shingle ridges by the bee hives.
ARC - 1115hrs At least 15 Smew here (including two drakes), 20 Goldeneye, 8 Shelducks and two Little Egrets. Several Marsh Harriers on the wing and a couple of Tree Sparrows in the car park.
Posted by Paul Trodd at 04:03