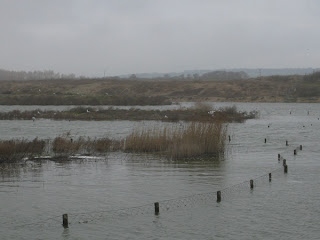 Rye Harbour - 1145hrs - Misty, murky, mild, W2 - Spent a couple of hours walking the circuit around the Beach Reserve with a sea mist rolling in off the bay. The place looks like a construction site (which of course it is) at the moment with the Environment Agency in action on Flat Beach and alongside the Rother. When its all finished (April-ish) not only will the sea defences be strengthened but a series of new wildlife friendly lagoons will be created.
On Ternery Pool the first of the Black-headed Gulls had returned to claim the best nesting sites alongside half a dozen Med Gulls `kowing` loudly. A large, mixed flock of Oystercatchers, Lapwings and Golden Plovers loafed on the shingle ridges. On Flat Beach several pairs of Ringed Plovers displayed alongside a scattering of Redshank, Grey Plover, Dunlin, Turnstone, Curlew and Lapwing. Good views of a Rock Pipit in front of the hide.
Pat and I can confirm that the Avocet cafe and gallery is well worth a visit, serving a variety of tasty snacks.
Posted by Paul Trodd at 09:53