Yesterday afternoon I heard the shocking news that Ray Turley had died whilst on holiday in Goa. The sense of loss down here amongst the Dungeness birding community is difficult to convey, but at this moment in time my thoughts, along with many others no doubt, are with his wife Janet.
For my part I`ve known Ray for many years but since moving to the Marsh in 2006 have got to know him and Janet really well. To say Ray was one of the great characters in British birding is an understatement. He was always great company in the field and had an incredible eye for detail borne out by an artistic bent. As a seawatcher he was in a class of his own and early mornings in the seawatch hide at Dungeness just won't be the same without Ray, breaking wind and calling out incoming Poms halfway across Rye Bay!
The last time I saw him was just before they went to Goa, when Pat and I joined Janet, Chris and Carol Philpott, Mark and Janice Hollingworth for dinner at their Greatstone bungalow. It was a cracking night and Ray was on fine form showing off his latest bird videos on the giant tv screen. Ray Turley, old mate, you will be sorely missed. 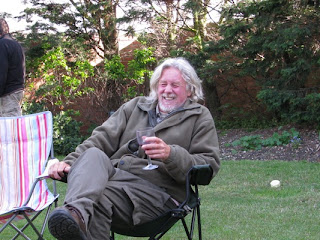