Raptors, Bittern and a Penduline Tit

Lade - 1100hrs - Warm, dry, sunny, E2 The spring like weather had the desired effect with a pair of Great Crested Grebes and a party of Goldeneyes displaying on south pit. From the raptor lookout noted 6 Marsh Harriers and a pair each of Buzzard and Sparrowhawk soaring over the farmland between the `mirrors` and the airport. A pair of Ravens made their presence felt by mobbing the Buzzards.
ARC - 1415hrs - News of a Penduline Tit on the bulrushes in front of Hanson hide drew a steady crowd of locals. By the time I arrived it wasnt playing ball but was eventually relocated in the reed bed at the end of the Willow Trail. Had poor views of it tearing into a bulrush about 100 yards distant. I presume this is the same bird that has been seen on and off since last autumn.
Walked down to the Screen hide with Barney and checked out a small flock of Lottis in the buckthorn en-route; all standard British race I`m afraid. In the hide chatted to Mick Sinden about Ray until I noticed a Bittern moving through an open part of the reed bed 20 yards away. Mick murdered it with his long lens and even I managed a few digi-pics. A cracking drake Smew stayed to the far side of the channel with a harem of 6 redheads. 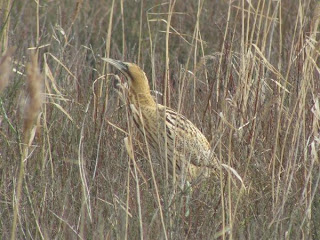