Dungeness - warm, dry and sunny, S 2 - Another beautiful day with a warm breeze wafting up from southern parts. Hundreds of Swallows and Sand Martins were on the move along the beach and perched on overhead wires preparing to cross the Channel, while a handful of Wheatears were noted opposite Jarman`s. Mipits were everywhere and the long-staying Wryneck was still present in scrub along the southern edge of the Trapping Area bordering the Desert.
It has been a good year locally for hawk-moths; even my garden trap has lured in Lime Hawk-moth and the migrant Bedstraw Hawk-moth, both new for the site, plus the regular Privet, Eyed, Poplar, Elephant, Small Elephant and Hummingbird on the buddleia. There has also been Convolvulus, Death`s head, Pine and Striped Hawk-moths recorded across the Dungeness recording area. So, not many more to come then... 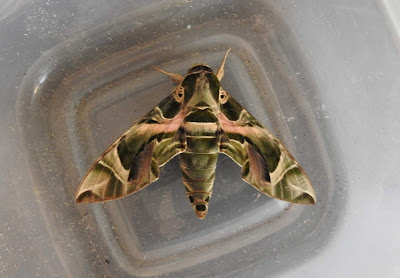 Until, that is, Martin Casemore emptied his garden trap this morning and discovered a pristine Oleander Hawk-moth settled on an egg tray! There are less than 10 records annually of this long-distance migrant from southern Europe or Africa, and no doubt the southerly airflow did the trick as other migrant moths were around the traps last night. The beast was temporarily stationed in the Obs fridge, where I paid homage. It was a first for me, a wondrous example of evolutionary camouflage and Mother Nature at her spectacular best.
Posted by Paul Trodd at 08:53