Lade - cool, cloudy, NW 3 - Plenty of Sand and House Martins over the lakes first thing this morning including quite a few heading into the north-westerly over the desert, where also two Wheatears. Around the ponds the first Reed Buntings of autumn, a Spotted Flycatcher, several Chiffchaffs and Common Whitethroats and a cracking Lesser Whitethroat.
Dungeness - Along the beach a few Wheatears and Mipits on the land and a steady flow of Sandwich Terns hugging the shoreline, plus two Stonechats and a Whinchat near Jarman`s and a scattering of Common Whitethroats in the scrub. We then wandered up to the southern end of the trapping area to look for yesterdays Wryneck which soon popped up and sat in the lee of a bramble patch sunning itself and looking perfectly happy, until some clown with a massive lens (who must`ve got good shots from range) and zero field craft approached too close and flushed it. This seems to be a recurring theme down here amongst certain visiting `photographers`, most of whom are easily identified by a combination of a long lens camera and an absence of binoculars... 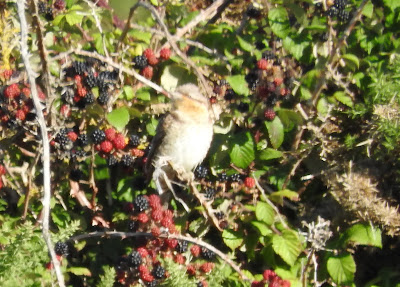 After a session at the allotment we called in at ARC where yesterdays work party had done a superb job of clearing the reeds and sallows in front of Hanson hide. An old Reed Warblers nest was left in situ and there was several birds creeping amongst the close margin showing well (where earlier a Bittern had also been seen). Waders on the islands were few and far between with just Lapwings, two Blackwits, a Snipe and a Golden Plover present. Amongst the dabblers two Pintail, Wigeon and Garganey noted with another two of the latter from Screen hide. Two Black Terns hawked over the lake and a Great White Egret was at the southern end. The bushes up to the pines held a few common warblers, most of which were heard as the brisk wind forced birds into cover.
Posted by Paul Trodd at 10:56