Lade - hot and humid E2  - A completely different feel to the weather today as a plume of muggy air moved up off the near continent bringing with it a fall of up to 20 Pied Flycatchers across the peninsula. Despite a thorough early morning search none were found around the ponds, but thanks to DB I saw two in his back garden on the Estate and another in the pines by Tower Pits, while the majority were seen in the Trapping Area and Long Pits. 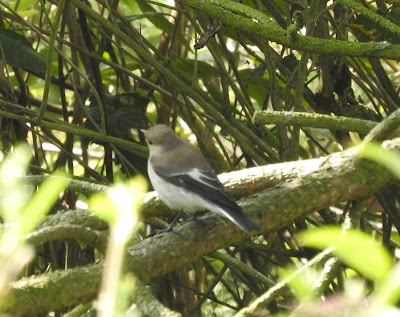 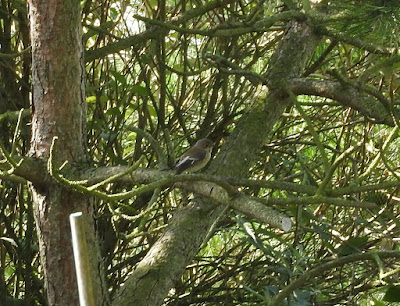 A scattering of Willow Warblers and Common Whitethroats also noted plus one or two Blackcaps and Lesser Whitethroats, two Great Spotted Woodpeckers and several Wheatear. From Hanson hide 20 Golden Plovers amongst 100 Lapwing, plus two Ruff, Dunlin, Garganey and Little Gull.
What with several reports of Honey Buzzards passing overhead this afternoon I tried a raptor watch from the sky space above Plovers for an hour looking east whilst listening to the Test Match. Result: one each of Sparrowhawk and Common Buzzard, plus plenty of Sandwich Terns off the beach.
Posted by Paul Trodd at 09:59